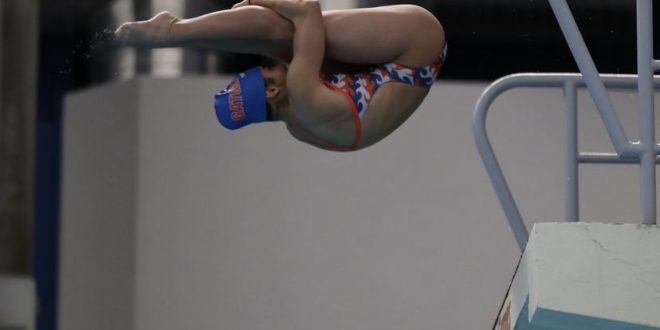 Diving hosted the last home meet in the O’Connell Center for the season on Friday and Saturday.  Friday’s events were the 1-meter and 3-meter dives.

Garcia only made his season debut last week against the FAU Owls for senior day. He was returning from an injury.

Saturday was no different as the Gators blew past the Seminoles on the platform dives.  Elettra Neroni placed first with 288.83 after the women’s total five rounds. Maha Amer placed second and Carina Lumia placed third.

Although Garcia didn’t finish the weekend winning all three events, he took third for platform with 357.15.  His final dive to wrap up the final round was a reverse three and a half somersault tuck off of the 10 meter. He received a score of fours from both judges for an award score of 40.80.

Anton Svirskyi dove the best on platform, winning with a final score of 434.03. During his final round dive, a back two and a half somersault one and a half twist pike, he received a nine and an eight and a half from the judges that earned a 84 score award.

In Ocala, the swimmers had few issues getting past Florida State. Both the men and women’s relays secured first place in the 200 medley relay to start the meet.

2020 Olympian Emma Weyant placed first in the 1650 freestyle and was 13 seconds ahead of the second place finisher. She also got a B-cut time for NCAA Division I Women’s Championships.