When the Florida Gator football team added Brent Pease to it’s staff after former offensive coordinator Charlie Weis accepted a job as the head coach at Kansas, the Gator Nation had a feeling there would be some changes to the offense. Pease has said that while last year’s team played more of a stretch game, he has more of a downhill, power game playbook in mind for this season. He says the running game is critical to a well-oiled offense.

One of the most important pieces of the offense this year may be senior running back Mike Gillislee. For the past few seasons, Gillisee has been waiting in the wings behind former teammates Jeff Demps and Chris Rainey, but Pease says this could be his year to shine.

While the starting running back position is just about sealed, the question on every Gator fans mind continues to be who will take that first snap on September 1st. Although head coach Will Muschamp will probably wait a little longer to announce his final decision, Pease says that the competition between Jeff Driskel and Jacoby Brissett gives the offense a lot to choose from.

Regardless of who gets the start Pease is confident that the offense will win games as a collective unit, not based on the play of an individual.

Tune in to ESPN Radio 850/900 on September 1st to check out Brent Pease and the new Gator offense when they take on Bowling Green in the season opener. 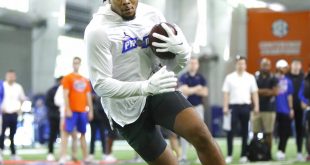