If the 24th ranked Gator soccer team (3-2-1, 0-0 SEC) plans on remaining over .500 this season, they’ll need to pull out a victory on the road this weekend against an SEC foe.

On Friday the Gators will be in Lexington taking on the Kentucky Wildcats (5-1-0, 0-0 SEC), who are red hot after taking down 12th ranked Louisville last Friday.  The Wildcats are an offensive powerhouse, averaging 16 shots per game, and Gators head coach Becky Burleigh says one way to limit their attacks is to maintain possession.

Burleigh adds that the Gators also need to tighten up their defense.  Ever since senior defender Kat Williamson went down with a meniscus tear during Florida’s game against FIU, the Gators’ backline has looked out of sorts.  Burleigh says defending set pieces and eliminating turnovers in the defensive third will be key for this team down the stretch.

Florida won’t have much rest after their Friday matchup against Kentucky, on Sunday the Orange and Blue will be in Auburn taking on the 21st ranked Tigers (4-3-0, 0-0 SEC).  At times this season Auburn has struggled offensively (1.23 goals per game), but the Tigers are led defensively by their senior goalkeeper and reigning SEC Defensive Player of the Week Amy Howard (1.0 goal per game against).  Burleigh says the Gators’ non-conference schedule has prepared her squad to play both attacking and defensive minded teams.

You can hear both games LIVE on ESPN Radio 850/900.  Coverage for Friday’s game against Kentucky starts at 6:50pm, with Sunday’s coverage starting at 2:50pm. 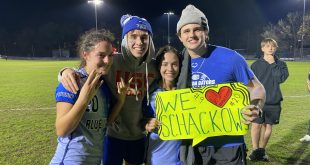