Winning was not a theme Sunday afternoon as all of the professional football teams in the state of Florida came up empty-handed against their respective opponents.

The Tampa Bay Buccanears couldn’t scale Mile High when they lost to the Denver Broncos 31-23. Peyton Manning picked apart the Bucs defense, throwing for 242 yards and three touchdown off of completing 27 of 38 passes. Broncos radio network recounted one of those touchdown passes to his wideout Demaryius Thomas.

The Bucs will have the opportunity to rebound though next week at home against the hapless Philadelphia Eagles.

In South Beach, the New England Patriots proved to be too much for the Dolphins, beating them 23-16. Saying that the Patriots’ defense thwarted the Dolphins’ offense would be an understatement as the Fins had a mediocre total of 277 yards. Miami head coach Joe Philbin says his offense wasn’t good enough to win.

Miami will be up traveling to the west coast against the stiff San Francisco 49ers next week.

For Jacksonville, it was more of the same. The Jaguars lost their 10th game of the season Sunday against the Buffalo Bills 34-18. Jags quarterback Chad Henne completed 44% of his passes, threw one interception and had a fumble.

Jaguars will be hosting  what is McElroy mania next Sunday as they take on the New York Jets and poosibly see their Jacksonville-native take the field in Tim Tebow. Jets Head Coach Rex Ryan hasn’t named a starter for the game. 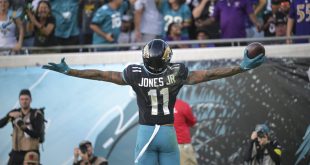