The final BCS standings are out! The Championship game will feature the top ranked Notre Dame Fighting Irish taking on the 2nd ranked Alabama Crimson Tide. Notre Dame finished their season undefeated, while Alabama defeated Georgia in the SEC Championship. Despite a host of one-loss teams, BCS Executive Director Bill Hancock says the BCS got the championship game right even with all the controversy surrounding it.

The title game is each goal of each team starting the season, but the it’s not the only feeling of a successful season. There are other bowl games that give teams the satisfaction of being able to have a post season. On January 2nd, the 3rd ranked Florida Gators will play the 21st ranked Louisville Cardinals in the Sugar Bowl, a familiar foe as Louisville Head Coach Charlie Strong was the former defensive coordinator for the Florida Gators. It will be the Gators 9th appearance in the Sugar Bowl and it will be the first appearance for the Louisville Cardinals. Sugar Bowl CEO Paul Hoolahan says he is glad to host the Cardinals’ first Sugar Bowl appearance.

The Rose Bowl will be the host for the match-up between 6th ranked Stanford and Wisconsin on New Year’s Day. The Fiesta Bowl will feature the offensively high powered 4th ranked Oregon Ducks and Heisman candidate Quarterback Collin Klein and 5th ranked Kansas State on the 3rd of January. The Orange Bowl taking place January 1st will consist of the 12th ranked Florida State Seminoles and number 15th ranked Northern Illinois Huskies.

There will be a multitude of other bowl games taking place as of December 15th until the big showdown between Notre Dame and Alabama on January 7th. 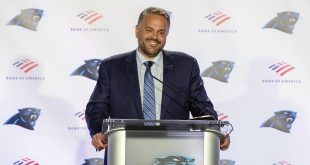 It is time for a turnaround in Charlotte, North Carolina and Matt Rhule could be …