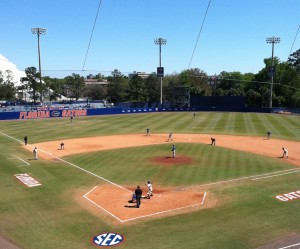 The University of Kentucky baseball team evened its series with Florida with an 11-5 win Thurday in Gainesville on Saturday. Kentucky is now 15-3 and 1-1 in the SEC while Florida falls to 9-11 and to 1-1 in league play.

Gator righty Jonathon Crawford started on the mound and took the loss, dropping his record to 0-3 on the year.  Crawford threw six innings, allowed three hits, five runs, walked four, and struck out two. He has thrown at least six innings in three straight starts. Florida coach Kevin O’Sullivan says he liked how aggressive Crawford was in the game.

Florida senior Vickash Ramjit drove in freshman Harrison Bader with a single to open up the scoring for the Gators in the bottom of the first inning. Florida sophomore Josh Tobias clubbed his second homer of the season and series into the left-field bleachers and the Gators added another run to hold the 3-0 advantage after two innings. Bader went 3-for-4 in the game and says the team kept the same approach throughout the game but couldn’t get anything going after the second inning.

Kentucky starter Jerad Grundy (4-1) settled down after the second frame and threw four shutout innings to keep the Wildcats in the game. Kentucky finally broke through in the sixth as A.J. Reed had an RBI triple and later scored on an rbi groundout to cut Florida’s lead to 3-2.

Things went south for Florida in the seventh when the Wildcats scored five runs on three hits, three hit-by-pitches, and two walks to take a 7-3 lead. The Gators answered in the bottom of the inning thanks to an RBI double by Bader to trim the deficit to 7-4.

Kentucky added some insurance runs in the top of the ninth. The Wildcats scored four runs including a two-run home run by centerfielder Austin Cousino to take the 11-4 lead. The Gators would plate another run in the bottom of the ninth but any chance for a comeback ended when catcher Taylor Gushue struck out to end the game.

Florida and Kentucky will play the rubber game of the three game series tomorrow at McKethan Stadium. The Gators are 2-2 in weekend series so far this season. Bader says he is confident the team will be ready to take the field for the deciding game.

Catch all of the action between the Gators and Wildcats tomorrow at 11:55pm on ESPN Radio 850/900.