The Florida Gators and the No. 17 Mississippi State Bulldogs meet this weekend in the Magnolia State for a three-game baseball series. This is the second of five SEC road series for the Gators. Florida is currently 14-16 on the season and 4-5 in conference play, while Mississippi State is 24-8 and 3-6 in the SEC.

Starting on the bump for Mississippi State will be senior lefty Luis Pollorena, while Florida will start junior right-hander Jonathon Crawford.  Pollorena has a record of 4-1 with a 3.34 ERA and 32 strikeouts, while Crawford has a 1-4 record this season with a 4.46 ERA, and 37 strikeouts.  Crawford picked up his first win last Saturday after pitching a gem against Ole Miss. The Gators went on to win the rubber match and get their first SEC series win on the season.

Gators coach Kevin O’Sullivan says they have been improving on the mound.

Florida and Mississippi State have yet to announce their Sunday starter.  Freshman right-hander Jay Carmichael has been Florida’s Friday night starter of lat, but O’Sullivan has not commented on why he is not starting tonight and there is no indication yet that he might start on Sunday.

Florida picked up its most recent victory in a 5-3 come-from-behind win on Tuesday night against Central Florida. UCF was up 3-2, but the Gators scored twice in the seventh inning and added one more run in the eighth for the win.

Mississippi State was on the road in South Alabama on Tuesday where they snapped a tie with a two-run hit in the ninth for a 6-3 win.  The Bulldogs have not picked up a series win in the SEC yet this season, with losses to Arkansas, Kentucky and LSU.

The Gators have taken eight of their last 11 regular-season series against the Bulldogs since 2000. Florida’s sophomore right-hander Ryan Harris says the Gators are looking forward to a good series this weekend.

The Gators Tentative Lineup is as follows:

Catch all of the action on the diamond tonight by tuning into our sister station Country 103.7 The Gator at 7:25 p.m. ET for live coverage. 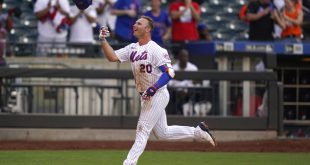