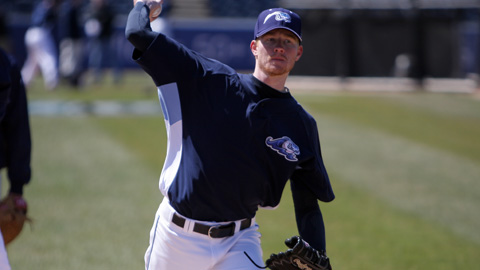 Pitcher Hudson Randall decided against Major League baseball when he was drafted in the 46th round by the Kansas City Royals in 2009. Instead, Randall came to Gainesville and established himself as the Gators’ ace by his junior year. Randall had a career ERA of 2.62 with 28 career victories as a Gator. Major League Baseball came calling once more after his junior year, but this time it was the Detroit Tigers organization that picked Randall in the 7th round.

“I was actually out at practice at UF, and our head coach Kevin O’Sullivan came out and told me the news,” Randall said about the day he found out he was drafted.

Randall was selected while Florida was in the midst of chasing a College World Series championship that Florida eventually fell short of achieving. In his last postseason as a Gator Randall had a 0.66 ERA while only walking one batter in three starts. While Randall no longer plays for Florida he still holds former head coach Kevin O’Sullivan in high regard.

“He’s a great guy to just be around and talk to. We had the relationship where he wouldn’t just tell me what to do, we would talk through it,” Randall said of his old head coach.

Randall’s new boss is Larry Parrish, the manager of the West Michigan White Caps, an A level affiliate of the Detroit Tigers. When Randall made his move to Michigan his game had to adapt as well. It wasn’t because of facing better hitters however; it was because of Mother Nature.

“Here up in the north it’s pretty cold, so the hitters don’t want the ball inside so the pitchers, myself especially, have been trying to get the ball in on the hitters,” Randall said about adjustments due to the weather.

While Randall toils at the A level, he dreams of playing in the Major leagues. That dream is very much within reach.

“My goal is to move up one level each year. In my eyes, I’ll be happy to reach the majors in 4 to 5 years or less,” Randall said of his timeline.

Many pitchers rely on their fastball to overpower hitters; Randall relies on control and precision. He sees his style as reminiscent of Greg Maddox, and he hopes that pitching approach can take him to the games’ highest level.