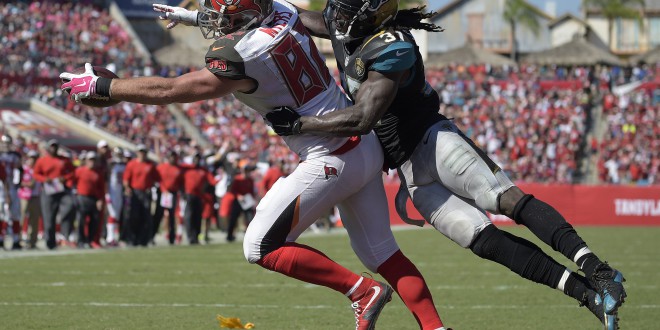 Florida NFL Recap: A Win, a Loss, and a Bye

Each Florida NFL team had a different outcome this weekend as Miami beat Tennessee, Jacksonville lost to Houston, and Tampa Bay was in a bye week.

Miami’s win came at a crucial time, after losing the past three games in a row, which cost head coach Joe Philbin his job. Interim head coach Dan Campbell took on the challenge this week, leading the Dolphins to their 38-10 win over the Titans.

“Just like I told the team, that’s the model. You know what it is now. You do have to go after each other during the week and make it competitive, otherwise you will not get any better. You’ll just stay the same. So those guys bought in; they believe…they played their hearts out. And they played for one another,” said Campbell.

And the physicality was there on Sunday, as the Dolphins had six sacks and two interceptions from Titans’ quarterback Marcus Mariota. Miami’s record is now 2-3 as the head into next week’s game against the Houston Texans.

The Jaguars were not so fortunate as they lost to the Texans on their home field, 31-20. Jags quarterback Blake Bortles threw for three touchdowns and three interceptions while completing 30 of 53 passes. Jags coach Gus Bradley said his team needs to learn how to execute during the game.

The Jags are still looking for a way to win, after losing four straight games. Jacksonville’s next chance to improve their 1-5 record will come on Sunday when they take on the Buffalo Bills.

The Tampa Bay Buccaneers (2-3) are coming off a bye week and will hit the road to Maryland on Sunday to play the Washington Redskins.

To listen to Campbell’s and Bradley’s audio clips, click below.

Previous Photo Gallery: Florida Falls To LSU
Next Eagles Down Giants on MNF, 27-7