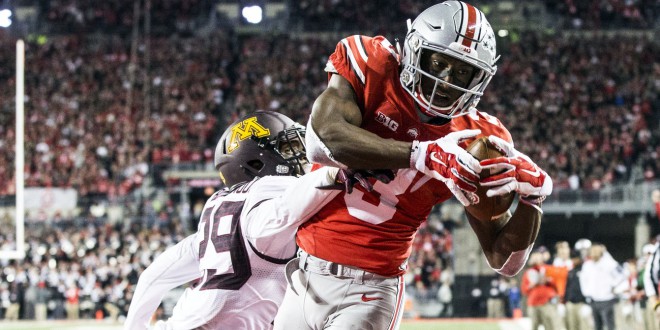 Updated College Football Playoff rankings will be released tonight and there will certainly be a stir in the order of this second edition.

In only one week after the release of the first College Football Playoff rankings, the selection committee has some serious reconstruction ahead of them. Three of the initial top eight teams went down (and so will their ranking) and LSU’s loss to Alabama over the weekend will vault another team into the top four, as the door hits them on the way out. One thing seems sure, Clemson (9-0) and Ohio State (9-0) will remain in the top three. Where? Well that’s for the committee to figure out.

No question, the team that everyone is talking about right now is Alabama.

The impressive fashion in which they dominated LSU 30 to 16 has people wondering if they’re deserving of the top spot, even with their one loss to the increasingly disappointing Ole Miss Rebels (7-3).

“I wasn’t surprised Alabama won…I thought LSU would have some success running the football,” ESPN SEC Blogger Chris Low said. “You know what, if Bama Defensive Coordinator Kirby Smart doesn’t call that corner blitz, I’m not sure LSU scores a touchdown in that game.”

“It’s not hard to see the coaches in that room saying, you know what, Alabama is the best team in the country, I don’t care what the record is,” said ESPN College Football Insider Brad Edwards.

We already saw from the initial rankings that the selection committee did not favor Ohio State over LSU. Alabama probably will get the same treatment that the Tigers did in these new rankings.

“I would not be surprised at all if Alabama is in the number one spot ahead of Clemson,” said ESPN analyst Danny Kanell.

Notre Dame an Oklahoma State are the top contenders for the last slot in the top four, with Notre Dame’s sole loss coming to the current (at least for now) number 1 team in the rankings, Clemson. Losing by two points against arguably the best team in college football isn’t a bad loss and doesn’t hurt their stock when evaluating if they deserve to be in the top four.

In some ways it helps; they are definitely in the conversation as the “best one loss team” behind Alabama.

Notre Dame was ranked number five in the first edition of the CFB rankings, and a win over Navy earlier in the season looks a lot better now after the Midshipmen blew out the previously undefeated Memphis Tigers on Saturday.

“It winds up now in the middle part of the season we’re saying, wow Navy and Temple, those are actually pretty good wins for Notre Dame,” ESPN Writer Travis Hainey said. “I just think in terms of resume, Notre Dame has done more than Baylor and Oklahoma State to this point.”

That being said, Oklahoma State will probably see the biggest jump in the rankings, and have made a serious case to be the new team to round out the top four.

Besides also being one of the six undefeated FBS teams left, they’re beneficiaries of LSU, Michigan State, and Memphis all losing on Saturday. Combine that with their blowout 49 to 29 win over TCU (8-1), who were previously ranked number eight in the playoffs rankings, and you have a team worth vaulting into the number four spot.

Baylor is undefeated. That is undeniable.

The Bears haven’t played a ranked team all season, nor have they played a team with a current record better than .500. Their lack of schedule strength will likely not be enough to push them into a spot higher than their current ranking at six.

Last Thursday, Baylor edged out a 31 to 24 win over a Kansas State team (3-5) that has struggled; their next four games will prove if they belong among the nation’s elite as they face as they host Oklahoma (8-1), then travel to Oklahoma State and TCU, before finishing with Texas at home.

Both Iowa and Florida have a chance to move up, but not for impressive performances. As mentioned earlier, a slue of teams in front of them lost, so that alone could improve their rankings.

But their uninspiring wins over the weekend have raised eyebrows in regard to their playoff hopes.

Iowa succeeded in staying undefeated, squeezing past Indiana (4-5) 35 to 27, a team that was crushed by Michigan State earlier this season and that had lost four straight games.

Florida didn’t play well, but managed to beat Vanderbilt (3-6) 9 to 7 and clinch the SEC East. They could be jumped by Stanford in the rankings.

Florida’s only loss this season was at the hands of LSU and its most impressive win was Ole Miss, which now doesn’t seem that impressive with the Rebels losing three of their last six games. It’s looking like an SEC Championship match up against Alabama is looming for the Gators, a must win to get into the playoffs.

The second edition of this season’s College Football Playoff rankings will be released tonight at 7 p.m. on ESPN.