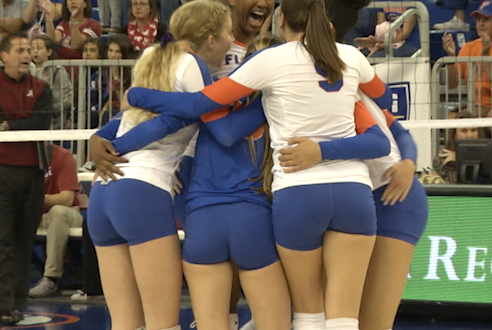 Florida volleyball had a tough first two sets against Alabama, but secured the win after dominating in the third set Friday night with scores of 25-22, 25-23 and 25-15.  The Gators are now 11-4 in SEC play and 19-5 overall after maintaining their perfect record against Alabama (41-0).  Florida right side hitter Alex Holston says the team’s ability to competitive was what kept the momentum going throughout the match.  Holston had a big night offensively totaling for 17 kills, just two under her season-best.  She says the hitters are able to be effective offensively when they’re unique with their hitting.

Florida middle blocker Simone Antwi was also able to provide her team with some offensive firepower, totaling 11 kills and a .786 hitting percentage with no errors.  Antwi says the entire team was able to connect from the pass to the set to the attack.  Florida head coach Mary Wise often refers to Antwi as the “grandma” of the team, being a fifth year student at the University of Florida.  Wise says Antwi has improved offensively as she has become a veteran of the team.

Passing was not up to par, according to Wise.  She says the reason Holston was able to tally up so much in the kill column was due to poor passing from the Gators.  Florida dominated much more in the third set unlike the first two close sets.  Wise says things such as serving and blocking were able to create havoc on Alabama’s side of the court.  The Gators served up a season-high of eight service aces.

Florida will have a quick turn around as they host the Tennessee Vols Sunday at 1:30 PM.  Live coverage will be provided by ESPN Gainesville 95.3 FM starting at 1:20 PM.