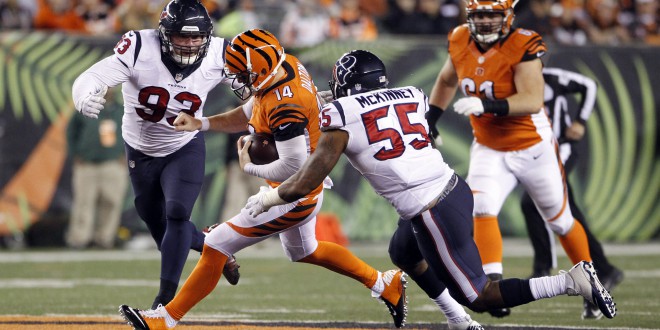 The Houston Texans gave the Cincinnati Bengals their first loss of the season with a final score of 10-6 in Cincinnati on Monday Night Football.

The Bengals kicked another field goal and led 6-3 at halftime but Houston wide receiver DeAndre Hopkins electrified the slow game with a one handed touchdown catch that put the Texans in the lead. Backup quarterback T.J. Yates delivered the 22-yard touchdown in the third quarter after Brian Hoyer sustained a concussion and was pulled from the game.

The Bengals were striving to make NFL history and join New England and Carolina at 9-0, the first time in NFL history that three teams would be unbeaten this late in the season but Yates’ heroics did not let that happen.  In fact, this seems to be a pattern for Yates as he beat the Bengals twice as a rookie in the 2011 season.

Yates went 5 of-11 for 69 yards in Monday night’s game. Bengals quarterback Andy Dalton had a hard time against the Texans defense as he went 21-of-37 for 187 yards with an interception.  He was also sacked three times.

It looked like Cincinnati still had a shot at the win when A.J. Green made a catch for what would have been a first down but he was stripped of the ball by Quintin Demps with only 40 seconds left to preserve the Houston victory.

Texans defensive end JJ Watt, who had a sack in the game and two hits on Dalton, said it is a privilege to play in the NFL and he shows a lot of love for the fans who allow him to have a career playing the game he enjoys.

Dolphins’ head coach Brian Flores will not name the starting quarterback yet. However, Miami should …