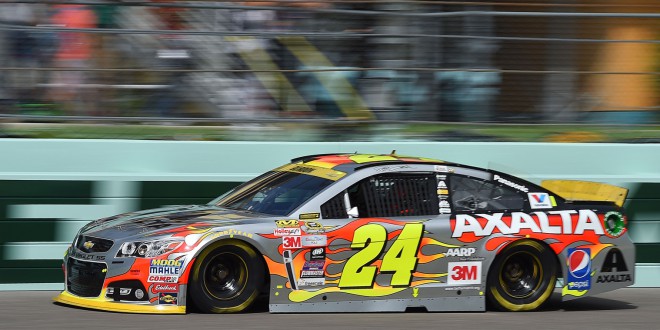 The final four drivers will compete for the NASCAR Sprint Cup Championship in the last race of the season at Homestead-Miami Speedway on Sunday. Jeff Gordon, Kevin Harvick, Kyle Busch and Martin Truex Jr. will all race in the Sprint Cup finale.

This is a huge race for Jeff Gordon, who has a chance of wining his 5th title. Gordon says he loves Homestead-Miami Speedway and that it’s a great track to end his career and the championship series. The driver of the number 24 car has won 93 races since his start in 1992 and has finished in the top ten 474 times. Gordon won the Championship series in 1995, 1997, 1998, and 2001. He is amazed that he has the opportunity to win another championship in his final career race.

2014’s Sprint Cup Champion Kevin Harvick will look to become the 11th driver in history to win back-to-back championships. Harvick is looked to be the favorite for this weekends race. He knows that going for his second straight championship is doesn’t compare to this being Gordon’s last race.

And for the other two racers competing in the 2015 Sprint Cup Championship series. Kyle Busch has had 33 wins in his 13 years of NASCAR racing and his best finish in Homestead was 4th. Busch missed almost a third of this season due to a foot injury back in February. Lastly the underdog Martin Truex, has won 3 races in his career and had 117 top 10 finishes.

No matter what the outcome, this will be a memorable championship series. And if Gordon can pull out a win, it would be a perfect ending to his 24 year career.

NASCAR Sprint Cup Series at Miami will start at 3:00 PM on Sunday.