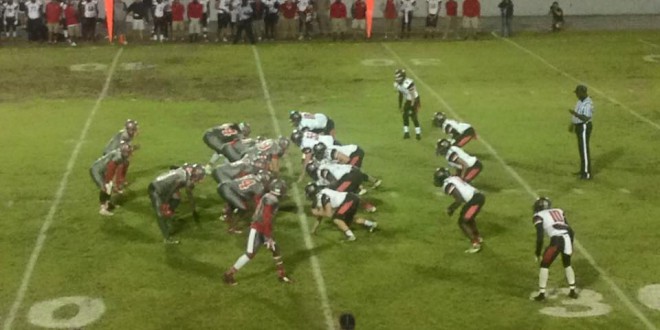 The Santa Fe Raider football team upset the Dunnellon Tigers in a thrilling 15-14 victory on Friday night at Santa Fe.  Earlier in the week, Santa Fe head coach Bill Wiles stated that his game plan was to limit Dunnellon’s big plays, and they did just that.  The Tigers had a hard time finding any offense early on, as the Raider defense shut down their passing threats for most of the night.

The Raiders played a risky game all throughout the night, and it began on their first drive.  On 4th and 2 at the Tigers end of the field, the Raiders opted to run the ball and successfully got the first down and entered the red zone.  They scored later that drive.

The Tigers responded with a big play of their own late in the second quarter.  On fourth down at midfield, the Tigers faked a punt and passed the ball downfield to  Jase Williams for a gain of about 35 yards.  That drive also resulted in a touchdown, tying the game at 7-7.

Just before the end of the half, Santa Fe drove down the field on a handful of 10 yard runs.  It looked like they might score again, when the ball was intercepted with 11 seconds left in the half.  The score remained tied.

In the third quarter, the Raiders again took a chance when they threw a long pass on third down that was intercepted by Josh Williams and returned to the Raider nine yard line.  The Tigers scored on the ensuing possession, taking the lead 14-7.

For most of the second half, the Raiders were plagued by penalties and could not run the ball as easily as they had earlier in the game; however, in the middle of the fourth quarter they caught a break when Tyler Jones intercepted the ball on the Tiger 30.  The Raiders then threw a long pass that was caught at the one yard line, eventually scoring three plays later.  Instead of kicking an extra-point, Santa Fe opted for a two point conversion, and succeeded. The score was 15-14 Raiders with the clock winding down.

Late in the fourth quarter, Dunnellon received the ball a final time and drove down the field on three big passes, the first of which was thrown to Layne Sanderson for a 39-yard gain.  The Tigers were in scoring position with two minutes left on the clock.  The Raiders held the Tigers off for three downs, though they were lucky as a third down pass in the end-zone to an open receiver was dropped inexplicably.  The Tigers went for a field goal on fourth down but the kick went wide left, effectively ending the game.

After the loss, Dunnellon head coach Price Harris said that he is tremendously proud of the work his team has done throughout the season.  He mentions that the game could have gone either way, but that in the end he would not trade his team for any other.  The Raiders will move onto the next round of the playoffs, but Wiles says that they still have some work to do in terms of offensive discipline.  Santa Fe will move on to play the Raines Vikings on November 27th.