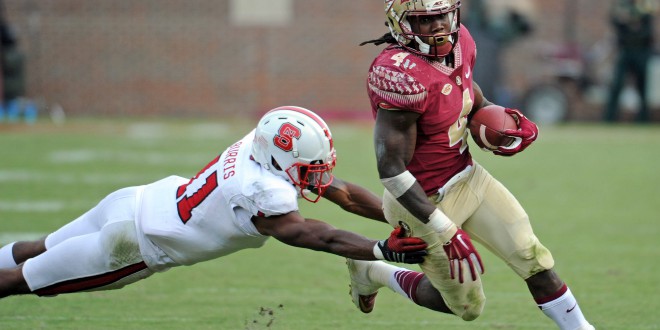 The Florida State Seminoles did not let a fumble on the opening kickoff stop them Saturday. They dominated Chattanooga, leading the game 38-6 in the third quarter. Running back Dalvin Cook’s left ankle injury did not seem to hold him back.  He was temporarily out in the first quarter Saturday, but he made his way back on the field to finish the game with 15 carries for 106 yards and two touchdown runs. He was once verbally committed to the Gators before switching to FSU about a month before National Signing Day. Cook remains a contender for the Heisman Trophy after rushing for over 100 yards in seven games this season. With Florida’s ninth ranked rushing defense, this is Dalvin Cook’s chance to impress the voters before the end of regular season.

The Seminoles (9-2) are traveling to The Swamp this weekend to face the Gators (10-1) for one of the most important rivalries of the year. If FSU beats Florida, they boost their chances to play in the “New Years Six” bowl game. Florida State climbed to No. 14 in the New AP top 25 poll, after coming off a 52-13 home victory to Chattanooga Saturday.

Florida State’s Head Coach, Jim Fisher, has won four games against Florida in his past five years as coach. He says the Florida-Florida State rivalry should be all the players need to fire them up this week.   Florida’s Head Coach, Jim McElwain, has resurged the Gators to win ten games in his first year of coaching. However, after struggling against FAU, he thinks FSU should feel pretty good about coming into the Swamp.

FSU has not lost to Florida since 2012, when both teams were ranked in the top 10. Florida has been ranked above FSU for most of the season, but New College playoff rankings come out Tuesday. Both teams are ranked high this year…and Jim Fisher says that’s how Florida-Florida state rivals should be.