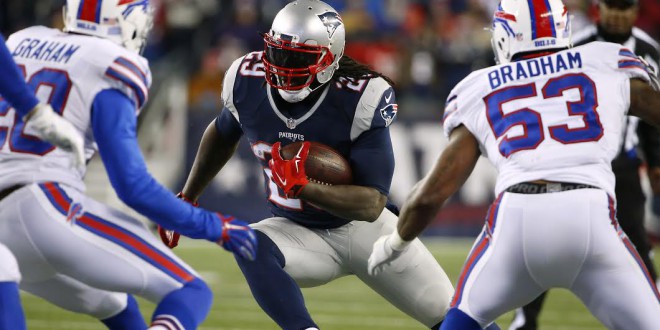 The Patriots remain as one of two defeated teams in the NFL after their take down of the Buffalo Bills last night on Monday Night Football, 20-13. Patriots QB Tom Brady is now undefeated in divisional games at home that he has played in from start to finish since 2006.

The first half was relatively quiet offensively with the two teams tied at three all the way until James White’s 20-yard touchdown catch from Tom Brady with 13 seconds left in the half. That touchdown would be the only one scored in the 1st half, giving New England a 10-3 lead going into the 3rd quarter.

The second half got off to an odd start and an officiating blunder that would be talked about heavily throughout the rest of the night. Early in the 3rd quarter, while rolling to the right side of the field, Tom Brady hit Danny Amendola about 14 yards down the field from the line of scrimmage. Although the catch was made, an inadvertent whistle signaled the play dead, on what would have more than likely been a 69-yard touchdown catch, putting the Patriots up 17-10 at the time. After the game, Tom Brady would even talk about the play as he saw it on the field. Instead, the play was blown dead where the ball was caught, and the Patriots picked up the first down, and tacked on 15 more yards on an interference penalty from the Bills coaching staff. At the end of that drive, Stephen Gostkowski would miss his first FG in 51 weeks, keeping the score tied at 10-10.

In the final six minutes of the third quarter, the Patriots would put up 10 points on a six yard touchdown run from James White and a 35-yard field goal from Stephen Gostkowski.

Bills running back LeSean McCoy led all rushers in the game with 20 carries for 82 yards and one touchdown. Both quarterbacks finished with average games, with Patriots QB Tom Brady totaling 277 yards on 20/39 passing adding a touchdown and an interception. Bills quarterback Tyrod Taylor went 20/36 with 233 yards, no touchdowns and no interceptions. Former Gators defensive end Dominque Easley helped lead the way defensively for the Patriots totaling two total tackles, half a sack, one tackle for loss and two quarterback hits.

After the game, Rex Ryan discussed the matchup between the two teams, even saying that the Patriots deserved to win. Next week, the Bills take on the Chiefs in Kansas City at 1 PM, while the Patriots face off against the Broncos in Denver at 8:30 PM on Sunday Night Football.