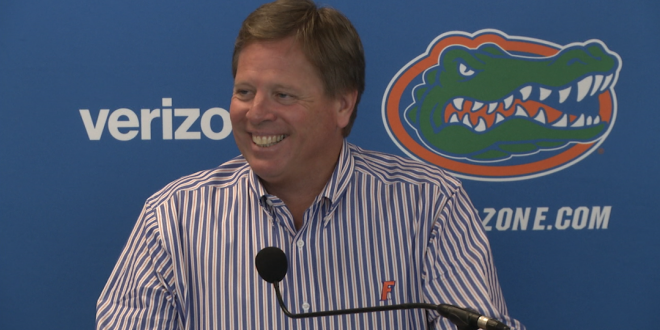 Gator Nation is electric this week as the 10-1 Gator football team prepares to take on 9-2 FSU this Saturday.  Florida has squeezed out a couple of close wins recently; first with Vanderbilt and then FAU.  Now that the game with the most pressure has arrived, the Gators have a couple key things to focus on.

First and foremost, the amount of injuries on the team has posed concerns.  Florida head coach Jim McElwain says there is enough depth on both sides of the ball to fill in the positions with injuries.  Here is an updated list on the Florida injuries:

#Gators injury report (shoutout to @ThomasGoldkamp for compiling this) pic.twitter.com/isEnMWSasX

McElwain has noted a few players that will have an impact on the rivalry game.  He says offensive lineman Trip Thurman’s size and abilities have been an anchor for the Gator football team.  Another player that will be relied upon Saturday is Antonio Riles who will be switching from the offensive side of the ball to the defensive side as he did last week.  McElwain says Riles’ background with defense won’t give him any issues when it comes to game time.  Wideout Brandon Powell has been sensational this season with his transition from running back.  McElwain says passes to Powell have not been accurate and they will need to be during the game against FSU.

Arguably the biggest challenge for Florida in the FSU game will be Heisman candidate Dalvin Cook.  Cook has been a powerhouse at the running back position with 1,475 rushing yards on the season (6th in the NCAA). McElwain even goes to extent of calling Cook a “fire-breather” and says Cook is an “it” guy when it comes to making things happen on the field.

As far as recruiting goes, for many players with offers to both schools will make their decision based off of this game.  McElwain says just like any big game, recruits will be there, but the difference this year is that they will know where the Gators are heading in terms of success.

The Gators and Seminoles will clash in the Swamp this Saturday at 7:30 PM.  Live coverage will begin at 3:30 PM on ESPN Gainesville 95.3 FM.