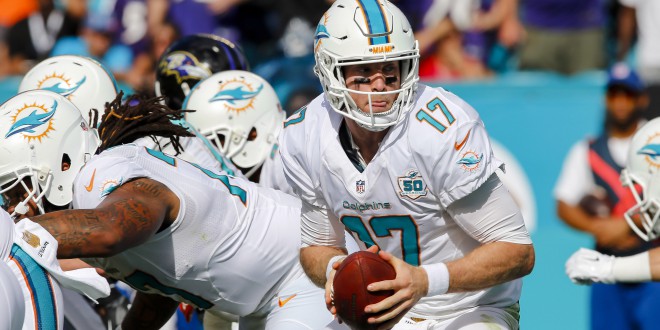 The Miami Dolphins kept their playoff hopes alive after an ugly 15-13 win over the Baltimore Ravens Sunday in Miami. With the win, the Dolphins improve to 5-7 on the season.  This game was won on defense for the Dolphins, as their two touchdowns were set up by deflected passes from Baltimore quarterback Matt Schaub.  The first interception by Reshad Jones gave the ball to the Dolphins and they capitalized on a 38 yard touchdown pass from Ryan Tannehill to DeVante Parker.  The second score was a pick six by Miami’s Derrick Shelby from 22 yards out.   The Dolphins then hit a two point conversion.

Miami’s interim head coach, Dan Campbell was impressed by how their defense changed the game.

In the second half, The Ravens finally scored when Javorious Allen ran 41 yards for a touchdown. Baltimore also hit a 31 yard field goal but it wasn’t enough offense to give the Ravens the win.

Despite the win, Miami’s offense is still struggling even after firing its offense coordinator a few days ago.  Miami quarterback Ryan Tannehill threw for only 86 yards as the team adjusts to new play caller Zac Taylor.

Next week, Miami plays at home against the New York Giants on Monday Night Football; the Ravens (4-8) will host Seattle on Sunday.