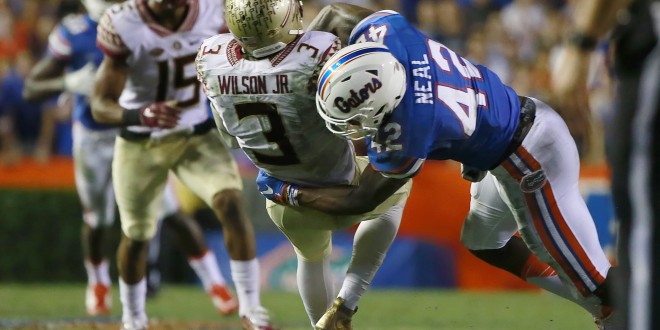 In what will be a big loss in the secondary for the Florida Gators, junior safety Keanu Neal has announced he will declare for the NFL draft.

“This was honestly the hardest decision I’ve ever made,” Neal wrote. “It’s time to take the next step in my life and attain my dream.”

“First day I stepped foot on campus, I knew I made the right decision. Nothing will ever take away the memories and bonds I have gained. I can confidently say that I have grown and matured a lot since my first day here, and it is due to the love and support of my family, friends, and Gator Nation!”

The hard-hitting safety started 11 of the 12 games he appeared in this past season. He racked up 96 tackles (third-best on the team), two sacks, and an interception against Georgia.

He ends his collegiate career with 146 tackles, four interceptions, and two forced fumbles including a 49-yard fumble-recovery return touchdown against Alabama in 2014.

Neal joins cornerback Vernon Hargreaves, running back Kelvin Taylor, and defensive end Alex McCalister as players choosing to forgo their senior season. McCalister, however, was dismissed by the team before their bowl game for an unknown violation of team rules. Wide receiver Demarcus Robinson is expected to declare but hasn’t done so officially.

Now many fans await the news of whether his teammate, safety Marcus Maye, will also take his talents to the NFL. The deadline to declare is January 18.

The hole in the secondary should open up playing time next season for returning safeties Nick Washington, Duke Dawson, and Marcell Harris.