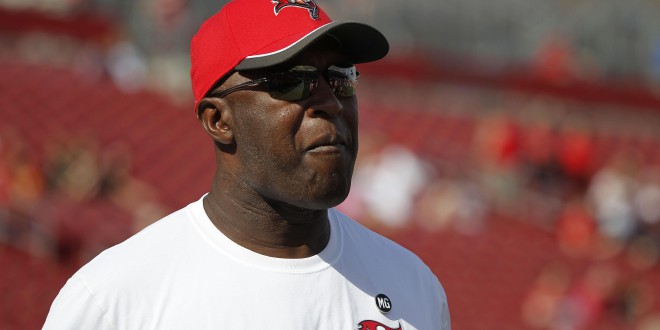 No Love for Lovie Smith

The number of head coaching vacancies in NFL has reached seven after the Tampa Bay Buccaneers fired coach Lovie Smith.

Smith, who went 8-24 in his two short years in charge of the team, received the news Wednesday night via a phone conversation. The buzz surrounding this news is how and when coach Smith was fired. ESPN NFL Insider Adam Caplan says this is not a normal way a coach is fired and there may be more to the story.

After improving upon four games from last season and having just one year with the No. 1 overall draft pick Jameis Winston, more than just fans and experts were shocked by the decision. Tampa Defensive tackle Akeem Spence were among the players who shared their shock with twitter.

WOW THIS IS CRAZY

The shock shared among players may stem from the fact the Buccaneers did in fact show improvement from last year. For the first time, Tampa ranked in the top 10 in total offense (No.5) and defense (No.10).

The highlights of the Bucs offense this season includes breaking 500 yards twice and averaging a team best 375.9 yards per game. Running back Doug Martin finished just behind Adrian Peterson for the NFL rushing title, and Wide Receiver Mike Evans finished with 74 receptions for over 1,206 yards.

In addition to these positives, Caplan says this team was rebuilding and the decision must have came from ownership.

Offensive Coordinator Dirk Koetter is quickly emerging as a top candidate. Former Bucs General Manager Mark Dominik says we should expect this but other candidates will be considered.

With Lovie Smith fired I would expect Dirk Koetter to be named head coach within the week. They still will interview a few other candidates.

The Bucs must now move on without the team’s third coach since Jon Gruden, who was fired after the 2008 season.

Another loss for the Bucs to the Lions 34-17

The Tampa Bay Buccaneers suffered another loss against the Detroit Lions on Sunday 34-17. This …