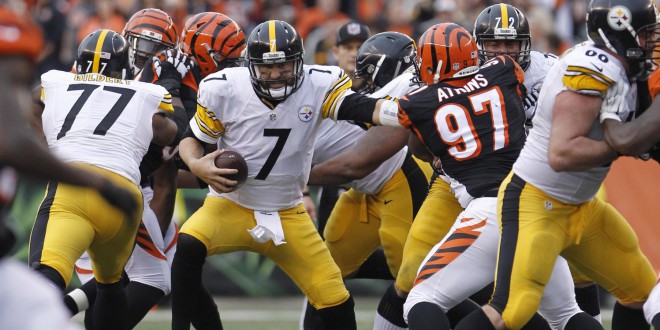 The NFL playoffs kick off this weekend with four wild card match ups. Saturday night will feature a matchup between AFC North foes Cincinnati and Pittsburgh.

Both teams enter the game with injuries to key players. Cincinnati quarterback Andy Dalton has been out since suffering a thumb injury during Week 14 and he is expected to miss this Saturday’s game. Bengals head coach Marvin Lewis said the team is preparing for AJ McCarron to be the starting quarterback against the Steelers. McCarron has posted a 2-1 record as Cincinnati’s starting quarterback since his first career start in Week 15 against San Francisco.

On the other side, Pittsburgh running back DeAngelo Williams is questionable for this weekend after suffering an ankle injury last Sunday. Williams has been the leading rusher for the Steelers this season. If Pittsburgh is without Williams this Saturday, this will be the second year in a row Pittsburgh will be without its starting running back for the playoffs. Last season, the Steelers lost running back Le’Veon Bell right before the playoffs and went on to lose in the wild card round to the Baltimore Ravens.

Roethlisberger’s struggles against the Bengals can be attributed to the strong play of the Cincinnati defense this season, a defense that allows only 17.4 points a game, which is second in the NFL. The Bengals defense is third in the NFL in interceptions and safety and former Gator Reggie Nelson is tied for the league lead with eight interceptions this season.

The Cincinnati defense will have to focus on containing the Steelers passing offense, which ranks third in the NFL and features wide receiver Antonio Brown, who is second in the NFL in receiving yards.

The most significant match up in the game may be between Pittsburgh’s offense and Cincinnati’s defense, but what will be very interesting will be how the teams respond to each other after the past physical contest featured trash talking and thousands of dollars of fines.

The game will kick off from Cincinnati this Saturday at 8:15 pm. Pittsburgh will be looking for its first playoff victory since 2011. The Bengals have not won a playoff game since 1991.

Junior telecommunication student at the University of Florida. Passionate about all things related to sports.
@@EllenBazley
Previous No Love for Lovie Smith
Next NFL Playoff Preview: Kansas City Chiefs Prepare for the Texans in the AFC Wild Card