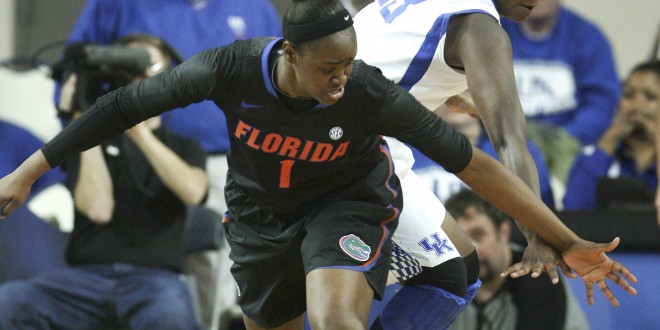 After initially being down by seven points early in the first quarter, the Gators stormed back with a 27-4 run to take the lead permanently. Florida went into halftime shooting 60 percent from the field and outscoring the Rebels 30-2 in the paint.

Despite cooling down to just 27 percent shooting in the second half, the Gators were able to extend their lead to as many as 26 points early in the fourth quarter, while also holding Ole Miss to 32 percent shooting from the field.

Butler says she’s proud of the way the team kept their foot on the pedal on both sides of the court.

Florida had five players reach double figures scoring (Carlie Needles, Dyandria Anderson, Tyshara Fleming, Cassie Peoples, Ronni Williams) as they dominated the Rebels in just about every statistical category. Williams bounced back nicely with her fifth double, double of the season (11 points, 12 rebounds) after being in foul trouble for most of the previous game against Tennessee.

Ole Miss was outscored 54-18 in the paint, their bench was outscored by 40 (48-8), and they were out rebounded 62-44. Butler says she hopes the team will continue to play with the same energy when they get back home.

The Gators will continue their SEC season when they play against Georgia at the O’Connell Center this Thursday. Tip-off is scheduled for 7:00 p.m.