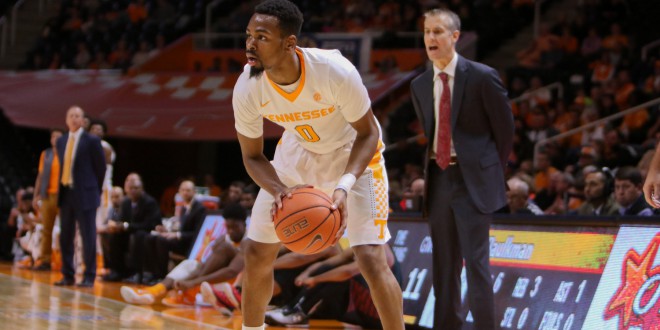 Kevin Stallings and his Vanderbilt Commodores will attempt to win their third straight SEC game when they travel to Tennessee tonight.

The Commodores (10-7, 2-3 SEC) are on a high coming off of two SEC wins against Auburn and Alabama. Wade Balwin IV leads all Vanderbilt scorers with 14.4 points per game. Damian Jones and Riley LaChance also average double digit scoring performances. Vanderbilt presents problems for many teams with their height, including three players at seven-feet and higher. Tennessee Head Coach Rick Barnes says the Commodores’ length and ball movement will challenge the Vols. To win on the road the Commodores will need top performances from Riley LaChance, who had a season high 18 points and shot five for six from three-point range last Saturday and Jeff Roberson who scored 16 points and grabbed 11 boards in their victory against Alabama. Head coach Kevin Stallings says to win on the road his Commodores will have to defend and win the ball possession battle.

The Volunteers (9-8, 2-3 SEC) were off to a strong start opening the 2015-16 season winning four out of its first five games under Rick Barnes in his first year at Rocky Top. However, since then Tennessee has proven to be inconsistent losing to the likes of Auburn, Georgia and Texas A&M and notching key wins against Florida and Mississippi State. Barnes has many scoring threats at his disposal with four players averaging in double digits per game. Point guard Kevin Punter is the Vols leading scorer and ranks second in the SEC for points per game. Punter averages 22.4 points per game and has shot 49.4% from the floor thus far this season. Other double-digit contributors for the Vols include three 6-foot-4 players in forward Armani Moore, guard Robert Hubbs III, and guard Devon Baulkman. The athleticism of the Tennessee team sure gives the Volunteers an advantage defensively, coming in close second in the SEC for blocks per game (5.5).

Overall the two teams are similar in their average points per game (Tennessee-79.6 Vanderbilt-78.4), yet Vanderbilt holds it opponents to less points per contest (Vanderbilt-65.4 Tennessee-76.4). One would think statistically speaking Vanderbilt will come away with the win, however winning in the Thompson-Boling Arena is no small task. In fact in Knoxville the Commodores are 18-70 all-time.

Tip off is set 9:00 p.m. The game will be televised on the SEC Network.