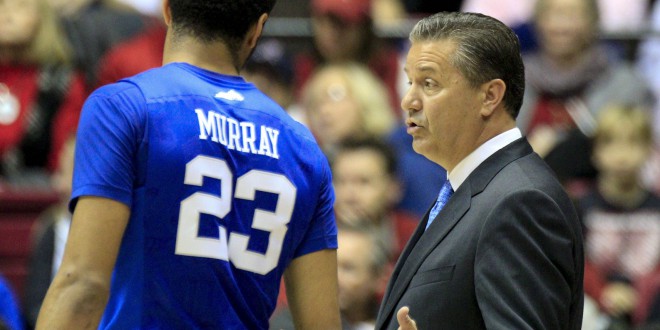 The No. 23 Kentucky Wildcats look to redeem themselves after a heartbreaking loss to the Auburn Tigers on Saturday.  The Wildcats travel to Fayetteville to face the Arkansas Razorbacks in an SEC rivalry game.  Both teams are 3-2 in the SEC, but Arkansas is looking to extend their three game win streak against the Wildcats at home.

Jamal Murray: Make winning plays is how we're gonna win games…Stay locked in.Have to focus. How much do we want it pic.twitter.com/VCtBak8ETU

The Kentucky Wildcats (13-4, 3-2 SEC) were previously ranked No. 14 and fell to No. 23 after losing to unranked Auburn.  Both of Kentucky’s SEC losses have come on the road (LSU, Auburn). Kentucky Coach John Calipari says the Wildcats need to improve on winning time, consistency of play, and toughness in order to win games.  Guard Jamal Murray leads the Wildcats in scoring with 302 points this season.

The Razorbacks (9-8, 3-2 SEC) last beat an AP Top 25 team at home on January 14, 2014th, shocking then No. 13 Kentucky 87-85 in OT.  Guards Anthlon Bell and Dusty Hannahs are the top three-point shooting tandem in the SEC, combining to make 99 three pointers on the year and shoot 47-percent from long range.  Razorbacks coach Mike Anderson says he is confident in his team and is ready to protect their home court in conference play.

The teams meet at Bud Walton Arena in Fayetteville, Arkansas at 7:00 p.m. tonight.

Hello my name is Kaitlin Alexander, a passionate story teller and lover of sports. Fun facts about me: I am a world traveler, interviewed all three UF Heisman Trophy winners, and a former intern of Bleacher Report. Follow me on Twitter: KalexanderUF
@KalexanderUF
Previous SEC PREVIEW: Tennessee Hosts In-State Rival Vanderbilt at Rocky Top
Next PREVIEW: Florida Prepares For Alabama To Roll Into Town