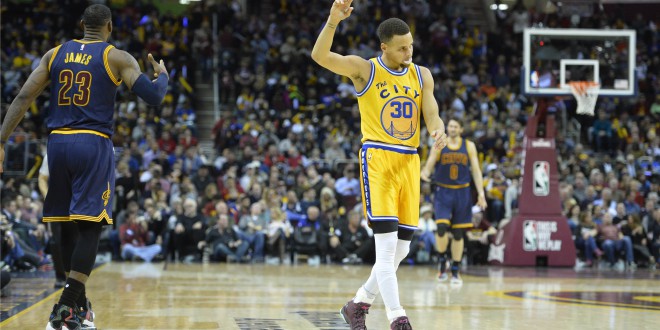 What a season it has been so far in the NBA. We are halfway to the NBA Playoffs which will take place in mid April. So far, one team has been making the most news across the league and fans cannot  seem to stop talking about them: The Golden State Warriors.

The Warriors are chasing 73 wins this season to break the record of 72 wins set by Michael Jordan and the famous 1995 Chicago Bulls team. They recorded the best start in the NBA history with 24 straight wins. Not a bad way to start the season.

In a rematch of the NBA finals last season, Stephen Curry and the Golden State Warriors beat Lebron James and the Cleveland Cavaliers 132-98 last week.  Lebron James has scored less than 20 points in his last three straight games, his longest such streak since his rookie season.

Leaders in the league are not a surprise to many people, Stephen Curray leads the league in offense and Andre Drummond leads in defense. Sacramento Kings guard Rajon Rondo leads the league with assists andMiami Heat big man Hassan Whiteside leads the NBA in blocks.

The midseason report card has the top team of the six divisions with the best record: in the East it is the Toronto Raptors, Chicago Bulls and Atlanta Hawks while in the West it’s the OKC Thunder, Golden State Warriors and San Antonio Spurs.

The two Florida NBA teams the Miami Heat and the Orlando Magic are making moves in attempts to make it to the playoffs. Miami’s Chris Bosh says injuries have really hurt them so far this season.

Orlando Magic Forward Tobias Harris says his team just has to figure out how to get a win.

Their is still a lot of basketball to be played and who knows what can happen. We are only half way through a very exciting season so far.