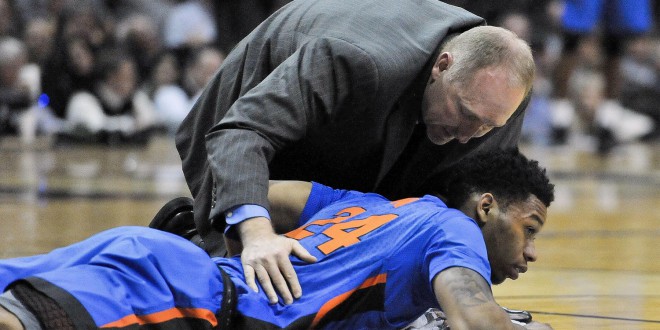 Late Surge Not Enough For Gators, Fall to Vanderbilt, 60-59

Despite taking 26 more shots than Vanderbilt and hitting five of their last seven from the field, Florida’s volume shooting attack wouldn’t be enough to take down Vanderbilt as the Commodores hold on to defeat Florida 60-59 Tuesday night in Nashville in an SEC men’s basketball contest.

Despite taking more shots than Vanderbilt, Florida shot poorly from the field at 33% while the Commodores shot 41%. In his post-game press conference, Florida head coach Mike White discussed the strong defensive effort put forth by the Commodores in their home arena.

Damian Jones and Wade Baldwin IV totaled more than two-thirds of Vanderbilt’s offense, combining for 44 of the Commodores’ 60 points. The pair went a combined 17 for 25 at the foul line and 13 of 27 from the field. Vanderbilt’s bench scored zero points, with all scorers not named Baldwin IV or Jones combining for 16 total points.

Florida’s success from three-point land in their last contest against Auburn didn’t translate to Tuesday night, with the Gators going 7 of 22 from downtown, including 0 of 10 in the first half. Despite winning the rebounding battle, 43-41, Florida’s 18 offensive rebounds only led to 12 second chance points.

Leading the Gators in scoring were KeVaughn Allen and Kasey Hill. Allen put up 16 points on 3 of 4 shooting from beyond the arc, scoring 11 of his 16 total points in the last 32 seconds. Hill knocked down seven shots, also good for 16 points.

Early in the contest while going for a rebound, Florida’s Justin Leon took an elbow to the face and would have to come out of the game. Leon would not return from the injury, finishing with one point. After the game, Coach White confirmed that Leon suffered a concussion, and talked about the adversity the Gators faced.

In the first eight minutes, both teams played to the fullest of their defensive abilities, with the Gators and Commodores both holding each other to under 30% from the floor. Florida and Vanderbilt hold their opponents to fewer points per game than any other two SEC schools.  The Commodores took advantage of a four minute scoring drought from the Gators by jumping to an 11-point lead with 7:48 left in the first half.

Vanderbilt closed the first half on an 11-7 run to take a 30-19 lead over Florida going into the locker room. In the final seven minutes of the half, UF turned the ball over seven times, going 1 of 12 from the floor.

The Gators shot 21% in the first 20 minutes to the Commodores’ 42%. Florida had no luck shooting the three ball in the first half, going 0 of 10 from downtown. Vanderbilt attempted only half of UF’s total three-pointers, knocking down two of them.

Damian Jones led all scorers in the first 20 minutes with 13 and five rebounds. The Gators had no scorers in double digits, with Kasey Hill scoring a team-leading eight first half points on 4 of 8 shooting.

The Gators finished with only one assist in the first half, taking a lot of shots early in the possession. While Florida took a 9-5 advantage in offensive rebounds in the first frame, Vanderbilt won the overall battle, outrebounding the Gators, 24-22. Florida’s 10 points off the bench in the first half helped keep it close.

Vanderbilt jumped out to a 13 point lead in the second half at the first television timeout. A loose ball rebound by the Commodores and a smooth shot from beyond the arc by Vandy’s Wade Davis IV looked to somewhat knock the wind out of Florida’s sails.

Chris Chiozza would have none of it, as he helped the Gators spark some momentum by hitting Florida’s first three-pointer of the night, after UF missed its first 11. A hook shot would follow from Dorian Finney-Smith, cutting Vanderbilt’s lead to nine with 12:46 left in the game.

A 12-2 run by the Gators would bring Florida within four points of Vanderbilt with just under 10 minutes left. During that run, the Gators went 5 of 5 from the floor, including two from downtown. With 9:40 left in the contest, Vanderbilt coach Kevin Stallings, the 17-year veteran, called a timeout to try and break Florida’s momentum swing.

With 55 seconds left, a Kasey Hill layup would cut the Commodore lead to six. While the Gators would finish the game 5 of 7 from the floor, their late breakout wouldn’t be enough. Coach Mike White talked about the final run after the game, summarizing the Gators’ strong last chance effort.

The Gators have perhaps their toughest match up of the season coming up in their next game. Florida will have four days to get ready for #9 West Virginia. The gritty Mountaineers average 82.2 points per game, and rank 35th in the nation in rebounding. WVU has won 10 of their 12 games, including a victory over #1 Kansas.