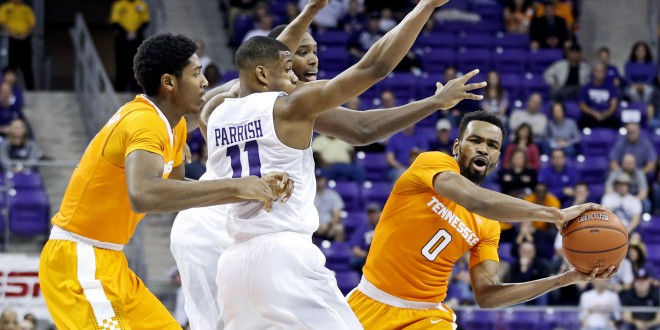 The 20th ranked Kentucky Wildcats men’s basketball team will hit the road to take on the Tennessee Volunteers tonightin Knoxville.

The Wildcats boast a 6-2 conference record, but have struggled to win on the road. Kentucky is 2-4 on the road this season. The Wildcats have scored 78.2 points per game while giving up 67.5 on defense. Kentucky is lead offensively by freshman guard Jamal Murray; the Canadian ranks fifth in the conference in scoring at 17.4 points a game, trailing only Stefan Moody, Kevin Punter, Ben Simmons, and Kareem Canty. The Wildcats have gotten great production from guard Tyler Ulis (16.1 ppg, 3.4 rpg, 6.2 apg) and will need him to play well to come out with a win.

Tyler Ulis is one of 10 finalists for the Bob Cousy Point Guard of the Year Award. https://t.co/Oq4JkqAQv2 pic.twitter.com/rrJ6mtfPJm

Speaking of the Kevin Punter, he’s done exceptionally well in finding the bottom of the net for the Vols. Punter is second in the conference in scoring at 23.0 points per game.  The senior from the Bronx will need a big time game against the Wildcats, as the Volunteers are giving up 75.9 points defensively. Punter had one of the better scoring games in college basketball this season against the South Carolina Gamecocks.

Most Pts in a Game this Season:

Tennessee (10-11) has lost two straight, but have the advantage of playing at home where they’re 9-2 this year. Volunteers head coach Rick Barnes is impressed by Kentucky’s ability to improve as the season progresses.