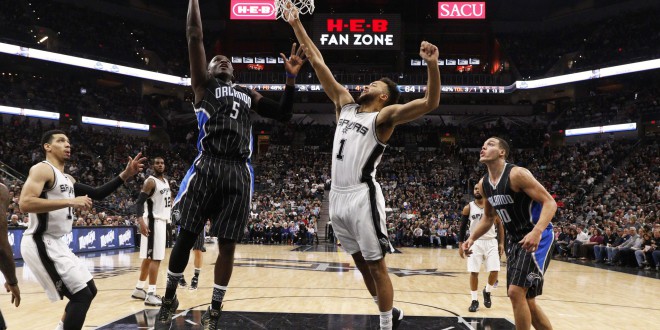 The Orlando Magic hoped to start the month of February with a bang after their disastrous moth of January, losing 13 out of 15 games.

The Magic learned Monday night that it is very hard keeping up with the San Antonio Spurs momentum resulting in a 107- 92 loss.

Going up against one of the best teams in the NBA is always a challenge but the young Magic team played kept up with the experienced Spurs. The Magic had a hard time controlling the Spur’s offense, allowing the Spurs to shoot 51 percent from the field and 38 percent from a  three-point range.

Magic forward, Aaron Gordan says the Spurs were too much to handle last night.

Last night the Magic couldn't come out on top vs. the Spurs.

Tonight, the Magic play Billy Donovan’s Oklahoma City Thunder (37-13) in Orlando. For Magic fans and maybe even Gator fans, Donovan’s return to the Sunshine State might not be a happy one. Back in 2007, Donovan was offered to be the head coach but turned down the offer after “a change of heart” when he decided to stay with the Florida Gators. Donovan coached the Gators for nineteen years. Oklahoma City will definitely bring the thunder tonight and hopefully the Magic can keep up. The game starts at 8:00 p.m.

The Miami Heat who are currently on four game win streak play the Houston Rockets tonight.  The Heat are making sure they are fully prepared for tonight’s matchup.

The Heat do have an advantage as the Rockets have lost three games in a row. Houston has to turn around quickly while the Heat want to keep their momentum going. Also, the Rockets will be without star center Dwight Howard is serving a one game suspension for bumping an official in their last game.

Miami Heat Head Coach, Erik Spoelstra, says the Heat’s offense is trying to find some rhythm for this game.

Preparing for tonight's matchup with the Rockets! pic.twitter.com/O7vLLU0fzY

Monday afternoon the Hear received bad news as their backup guard Tyler Johnson will undergo surgery and will likely miss the rest of the season due to his shoulder injury. Hopefully it won’t reflect the outcome of tonight’s game.

Hello my name is Kaitlin Alexander, a passionate story teller and lover of sports. Fun facts about me: I am a world traveler, interviewed all three UF Heisman Trophy winners, and a former intern of Bleacher Report. Follow me on Twitter: KalexanderUF
@KalexanderUF
Previous SEC HOOPS PREVIEW: Kentucky at Tennessee
Next SEC HOOPS PREVIEW: Johnson and Howland Square Off for the First Time