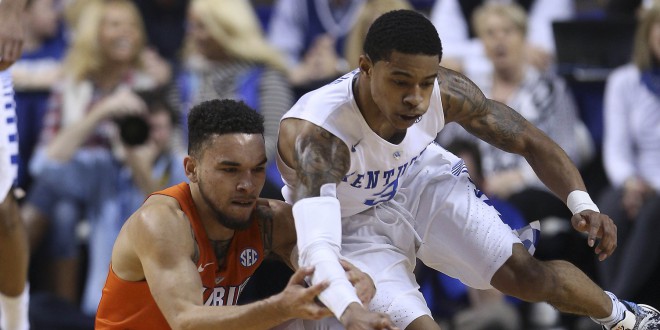 The combo of Tyler Ulis and Jamal Murray was too much for the Florida men’s basketball team Saturday in Lexington, Kentucky as the 1-2 punch combined for 53 points in an 80-61 Wildcat win. The Wildcats have now won 33 straight games at home, good for the SEC’s longest active home winning streak.

Kentucky was lights out from three-point range, going 12 of 20 from beyond the arc. Jamal Murray led the Wildcats’ downtown charge, going 8-10 from three, finishing with 35 points and six rebounds. Tyler Ulis finished with 18 points, going 2-3 from beyond the arc, adding 11 assists, giving him his second double-double of the season.

The Gators struggled from the floor and at the free throw line in this game, shooting 40 percent as a team, 32 percent from downtown and 65 percent from the charity stripe. Despite the poor offensive performance, Dorian Finney-Smith scored 20+ points for the fifth time in seven games, going 8 of 11 from the field, scoring 24 points and grabbing eight boards. Florida finished the contest with only 10 total assists, four of which came from Chris Chiozza. Chiozza had a brutal day, going 1 of 8 from the field.

Both teams had rebounded the ball well on the season, but Kentucky showed out against Florida on Saturday afternoon. The Wildcats outrebounded the Gators, 37-28, grabbing 11 offensive rebounds, turning that into 17 points. Florida only outshined Kentucky in bench points, outscoring UK, 15-8.

Kentucky beats Florida 80-61 behind Jamal Murray's 35 points, which ties Terrence Jones for most by a Kentucky freshman in a single game.

Kentucky opened the game 4-4 from the floor, jumping out to a 10-2 lead with 18:06 left in the first half. The Gators had two turnovers in that span, leading to five points for the Wildcats. A short two minutes later, Kentucky continued to pound Florida into the ground, taking an 18-5 lead on 4 of 5 shooting from beyond the arc.

After 10 minutes, the Gators found themselves in an even bigger hole than they started, down by 16 to the Wildcats. Florida had already turned the ball over five times, and were shooting an abysmal 29 percent up to that point.

The Wildcats jumped to a 41-17 lead, their largest of the first frame, after a 13-2 run, capped off by an Isaac Humphries jumper. With 5:31 left in the first half, Jamal Murray had as many points as the entire Gators team, with 17.

An 11-0, two and a half minute run for the Gators cut Kentucky’s lead to 14 with three minutes left in the first half. The Wildcats turned the ball over four times in that span, compared to their six turnovers in the entire half.

Kentucky closed the half on an 8-3 run, which would’ve been 8-0, if not for KeVaughn Allen’s three-point floater off the glass to end the first 20 minutes. The basket accounted for Allen’s first and only points of the first half. The Wildcats led 50-32 going into the locker room.

The Gators couldn’t hit the broadside of a barn in the first half, shooting 37 percent to the Wildcats’ 62 percent. Kentucky’s three-point game was unstoppable in the first frame as well, knocking down seven of their 11 looks from downtown.

Jamal Murray led the Wildcats with 20 points in the first half on 5-5 shooting from three-point range, adding four assists. Dorian Finney-Smith was the lone Gator player in double-digit scoring in the first half, knocking down four of six shots for 10 points. Finney-Smith also hauled in a team-leading five boards.

In the first half, Florida’s half court offense wasn’t able to settle into its regular form, finishing with only four assists to Kentucky’s nine. Each team scored seven points in transition, and had six turnovers in the first frame.

The Gators opened the second half with a lineup consisting of Kasey Hill, Devin Robinson, KeVaughn Allen, Justin Leon and Schuyler Rimmer, a squad far different from the first half starters.

After five minutes of the second frame, not much had changed with Kentucky up, 62-42. In that span, Dorian Finney-Smith scored eight of the Gators’ 10 points.

The Gators cut Kentucky’s lead to 16 following a 9-3 run with 10:45 left in the game. The run spurred Coach Calipari to take his first timeout of the second half to reprimand his team for their poor effort on the defensive end during the Gators’ run.

From the 7:46 mark of the second half to the 4:03 mark, both teams went scoreless, shooting a combined 0- 7 from the floor. The Wildcats finally ended the scoring drought with a layup from Jamal Murray. The Gators scoreless streak would run a little longer, lasting until Brandone Francis-Ramirez’s three-pointer with 3:03 left in the game. Francis-Ramirez finished with seven points on 3 of 7 shooting.

Kentucky ended the game on a 6-0 run, as the Gators scored only two points in the final two minutes of the game.

Florida will have two days off before taking on the Ole Miss Rebels Tuesday at the O’Connell Center. The Gators took down the Rebels on the road in their first meeting, winning 80-71. Dorian Finney-Smith finished with a double-double in that one, scoring 17 points and grabbing 10 rebounds.