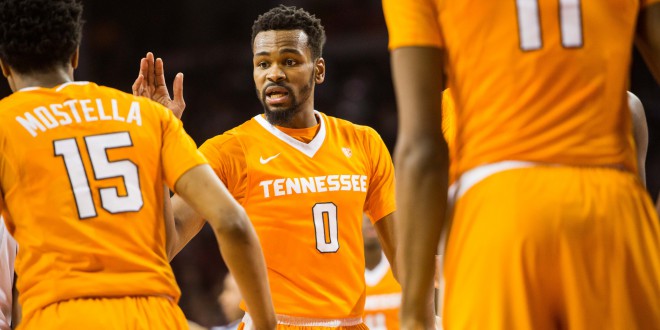 The Auburn Tigers (9-13) make their way to Rocky Top to take on the Tennessee Volunteers (11-12) tonight. Both teams rank in the bottom four of the conference. Unfortunately for the Auburn Tigers, they’ll be without their star guard Kareem Canty who is suspended indefinitely for conduct detrimental to the team. Canty still ranks fourth in the conference in scoring with 18.3 points per game.

For the Volunteers it’s Kevin Punter who leads Tennessee’s offensive attack. Punter ranks second in the conference in scoring with 23.2 points per game. The Volunteers are coming off a big loss to the Arkansas Razorbacks by a score of 85-67. Tennessee could not avoid the let down after their come back 84-77 win over the Kentucky Wildcats on February 2. Punter’s 27 points helped lift Rick Barnes’ team to the momentous win in T-B Arena.

The Tigers and Volunteers are eerily similar on paper. Auburn is averaging 73.3 points per game and giving up 77.5 defensively. While Tennessee is scoring 77.3 points per game and allowing 76.3 on defense. Neither team has played well on the road, as the Tigers are 1-8 and the Volunteers are 1-7 on the road. Conference play has been unkind to both teams, as Auburn is 3-7 in the SEC and Tennessee is 4-6. Both teams are coming off of losses.