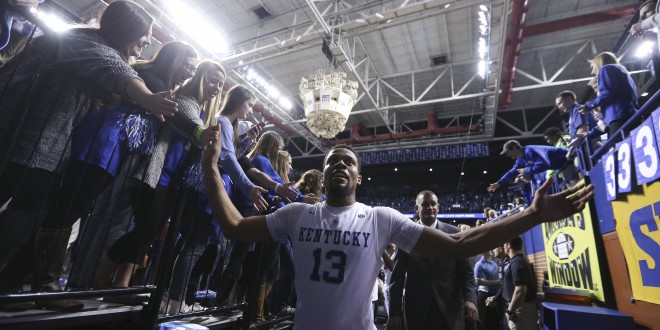 Tuesday night the Georgia Bulldogs (13-8 6-4 SEC)  travel to Lexington to take on the 22nd ranked Kentucky Wildcats (17-6 7-3 SEC)  in an SEC showdown. The Bulldogs and Wildcats are two of the top teams in the conference with Kentucky tied for second and Georgia tied for third.

Kentucky is coming off an up and down week. Last Tuesday they fell to unranked Tennessee on the road despite having a 21 point lead late in the first half. The Wildcats would bounce back though on Saturday as they returned home to take on the Gators. Kentucky freshman Jamal Murray led the way dropping a career high 35 points in route to a 80-61 victory over Florida. Due to their loss to the Volunteers Kentucky fell two spots in the newest AP poll to number 22.

Jamal Murray has led the Wildcats in scoring most games this season averaging a team high 18.3 PPG. Sophomore point guard Tyler Ullis isn’t far behind with 16.3 PPG, but Ullis also leads the team with 6.4 APG.

The Bulldogs are coming off a week where they dropped a ranked team of their own. Georgia dominated then 25th ranked South Carolina at home last Tuesday making it their first win over a ranked team this season. Georgia followed that win up with another dominate victory at home over the Auburn Tigers on Saturday 65-55.

Kentucky head coach John Calipari knows that Georgia’s defense has been a big reason why the Bulldogs have been hot of late.

Offensively the Bulldogs like to spread the ball around with four different players averaging over ten points per game. Junior guard JJ Frazier leads the bunch with 16.3 PPG, but more impressively he shoots over 40% from downtown.

Calipari knows that Georgia can keep games close due to the experience of their guards.

This match-up heavily favors Kentucky due to their success at home and Georgia’s struggles on the road. The Wildcats are 13-0 at home this season and in fact haven’t lost a home game since the 2013-2014 season. Playing on the road isn’t something the Bulldogs do well either since they are just 1-5 when not in Athens.

Kentucky may be without one of their best big men this game with Alex Poythress dealing with a knee injury. The senior injured his knee during pregame warm ups against Florida on Saturday causing him to be ruled out for the game. Poythress has been labeled day-to-day since then and has not officially been ruled out for this match up. Poythress is third on the team in scoring with 10 PPG and leads the team in rebounds averaging 6.6 a game.

Georgia will look to beat Kentucky for the first time in three years with tip-off from Rupp Arena set for 9:00 p.m.

Im a senior at the University of Florida currently pursuing a degree in Telecommunications. I work for ESPN Gainesville 95.3 and anchor the Monday sports broadcast for WUFT First At Five. Im from New York and an avid sports fan of all New York teams.
Previous SEC PREVIEW: Auburn at Tennessee
Next Former Gators QB, Chris Leak Hired as Head Coach of Edgewater High School