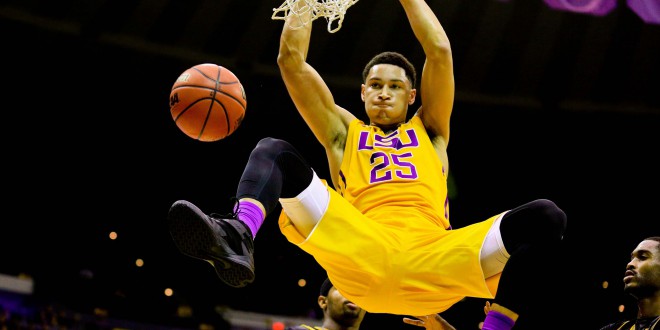 The LSU Tigers (15-8, SEC 8-2) and freshman phenom Ben Simmons come into tonight atop the SEC rankings and yet, it will be the Tigers that hope to prove they belong as they face the South Carolina Gamecocks (20-3,  SEC 7-3) in Columbia.

Head coach Johnny Jones seems to have LSU playing their best basketball right now having won their last four of five match ups. The Tigers feature a likely NBA number one draft pick in freshman forward Ben Simmons who leads the team with 19.4 points per game (3rd in the SEC), 12.3 rebounds per game (1st in the SEC) and 1.9 steals per game (2nd in the SEC). Four other players are averaging double digit scoring performances including senior guard Keith Hornsby (13.4 ppg) and sophomore forward Craig Victor II (12.7 ppg).

The Gamecocks will have their hands full tonight as the confident LSU offense stars the highest field goal percentage of any team in the SEC (46.7%) and ranks second in the conference in total points per game (81.3 ppg). Although LSU is projected to be a “bubble team” come March, head coach Johnny Jones says the team is continuing to improve and will benefit from a tough conference schedule.

As for the Gamecocks, who recently dropped out of the top 25 AP poll, they hope to gain momentum following their thrilling 81-78 win over the then No.8 Texas A&M Aggies last Saturday. The Gamecocks are led by senior forward Michael Carrera with 14.1 points per game and 7.2 rebounds per game. Three other players that are averaging double digit scoring performances include Sindarius Thornwell (12.7 ppg), Duane Notice (10.9 ppg) and Mindaugas Kacinas (10.5 ppg).

The Gamecocks are the first SEC team to reach 20 wins with over a month of basketball left to be played and head coach Frank Martin believes the current team has brought great growth to the program.

BROADCAST INFORMATION: Wednesday’s match up between LSU and South Carolina tips off in Columbia at Colonial Life Arena at 7:00 p.m. and can be seen live on ESPN2.