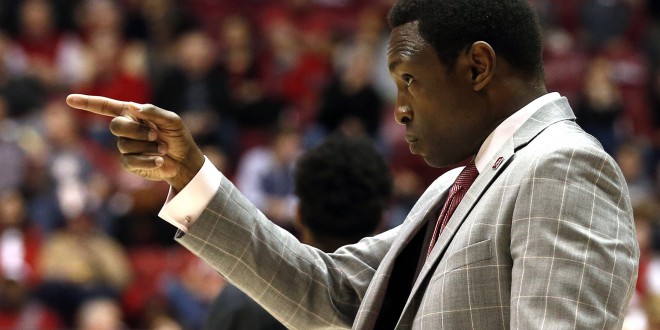 The Texas A&M men’s basketball team has been struggling this week as they look for a turn around victory against Alabama tomorrow night. Texas A&M head coach, Billy Kennedy, is optimistic looking ahead for the remaining part of the season and is ready for the fight against Alabama.

Texas A&M dealt with its first home loss on Saturday, 81- 78 against South Carolina, and dropped its lead in the SEC after losing to Arkansas and Vanderbilt.

The Aggies are ranked 15th and are striving to get back into first place in the SEC, which would mean a vital victory over the top 25 Alabama team. Alabama head coach, Avery Johnson, may be new but he knows his team will have to come out strong.

This is Alabama’s first season under Johnson and the Crimson Tide has seen a great turn around going 3-2 against ranked opponents after previously losing 21 games straight before his arrival. His strategy in analyzing each team before the match-up seems to be working.

Johnson is familiar with the Texas team as his son played for the Aggies during the 2014-2015 season before transferring to Alabama. He is aware that execution is key and his team must show up ready to work hard against this tough opponent.

One of Alabama’s leading scorers, Shannon Hale, is hoping for the chance to play after suffering from a foot injury that benched him the past two games.

The Crimson tide sits with a 8-3 record at home and has won four of the Aggie’s five visits.

The teams will face off tomorrow night as Alabama hosts’ the No. 15 Texas A&M team in the Coleman Coliseum. Tip off is set for 6:00 p.m. CT.