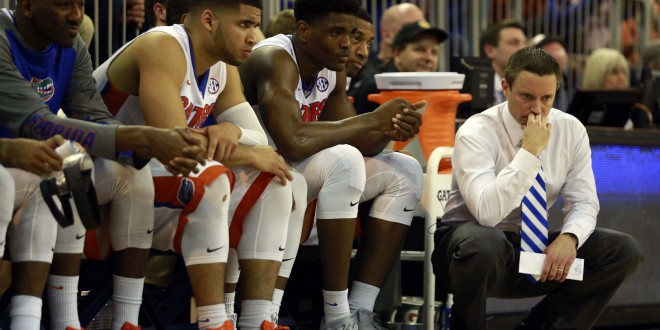 On Saturday evening, the Florida men’s basketball team just couldn’t hit a free throw, a shot from the floor or from beyond the arc and it cost them in a 61-55 home loss to the Alabama Crimson Tide, Florida’s first home loss against an SEC team this season.

Florida hit just 16 of 27 tries from the charity stripe, but its shooting troubles extended past the free throw line, as the Gators shot just 28 percent from the floor and only 15 percent from three-point range. Alabama’s tough defense also had something to do with that as Florida head coach Mike White postgame described Alabama’s tenacious defense.

Dorian Finney-Smith was Florida’s leading scorer in this one, putting up 12 points and nine rebounds on 3 of 8 shooting. Coach White discussed Finney-Smith’s important role in the offense, and what happens when other teams limit him. While John Egbunu did record his fifth double-double of the season with 10 points and 11 rebounds, his six of 14 performance from the free-throw line certainly did not help the Gator offensive cause.

Despite fouling out with 5:35 left in the contest, Alabama’s Retin Obasohan led all players in scoring with 15 points on six of 16 shooting, while grabbing seven boards. Alabama shot 42 percent  from the floor, while also knocking down 42 percent of their three-point looks.

While the Gators outrebounded the Crimson Tide, 54-35, and grabbed 24 offensive rebounds, Florida was only able to score 11 second-chance points. Jimmie Taylor helped Alabama dominate the interior, as the Tide outscored the Gators in the paint, 28-20. Coach White, following the game, tried to summarize the Gators’ offensive rebounding anomaly.

Florida started out a poor 1-7 from the floor, with John Egbunu going 0-4, missing looks inside. The Gators found themselves trailing by five points after the first five minutes.

A 5-0 run by the Gators and four minute scoring drought from the Crimson Tide would get the game tied at eight with just over 12 minutes to go. The two teams shot a combined 28 percent, eight and a half minutes into the game.

Justin Leon gave the Gators’ their first lead of the game with 8:20 left in the first half. Leon was the enterprising scorer that Florida needed in the first frame, finishing the first 20 minutes with seven points on 3-5 shooting.

Florida closed out the half on an 8-3 run, in which Alabama’s only three points came off of a long three-pointer by Justin Coleman as time expired. Neither team shot well in the first half as the Gators went into halftime up 27-23.

Florida and Alabama both shot 30 percent after the first frame, with UF hitting just 22 percent from beyond the arc while Alabama went 3-7 from distance.  Florida’s main first half advantage came on the boards, where UF out rebounded Alabama, 26-18, while racking up 10 offensive rebounds.

In fact, Florida had four different players with at least four rebounds in the first half, including Finney-Smith (5), Egbunu (5), Leon (4) and Allen (4), with Egbunu, Allen and Finney-Smith all playing a team-leading 17 minutes in the first frame.

A three minute scoring drought early in the second half limited the Gators’ ability to keep up with the Crimson Tide, as Alabama took its first lead of the second frame after an 11-6 run. The Tide led 34-32 with 13:36 left in the game.

With 7:35 left in the contest, Alabama took its largest lead of the game up to that point, going up 45-41, after a powerful, rim-rattling dunk from Jimmie Taylor over John Egbunu. Egbunu was taken out immediately afterwards for Schuyler Rimmer. Coach White discussed what he tried to do defensively in the second half to break the Gators’ shoddy rhythm.

Alabama then took a seven-point lead with 3:11 left in the game, after Jimmie Taylor’s second vicious posterization of John Egbunu. Egbunu, the seven-foot big man, is rarely on the wrong side of a slam at the O’Connell Center.

With three minutes left, the Gators found themselves down by seven and knew they had no margin for error defensively if they wanted to make a comeback. Unfortunately, Florida could not consistently hit a shot down the stretch, as the Gators hit only two of their last 15 shots in this one.

Florida’s next game comes on Tuesday night in Athens, as the Gators take on the Bulldogs for the second time this season. Florida won their first game against Georgia in its SEC opener, 77-63. Florida is now 16-9 overall and 7-5 in the SEC and Coach White recapped Florida’s road ahead and how difficult it may be.

Roll Tide Roll!@AlabamaMBB wins 61-55 over the Gators, their 1st win in Gainesville since 1995. #BuckleUp pic.twitter.com/20F7rrk9rV

Previous Gator Lacrosse Slides Past Michigan For The Win
Next PREVIEW: No.16 Florida Women’s Hoops On The Road To Auburn