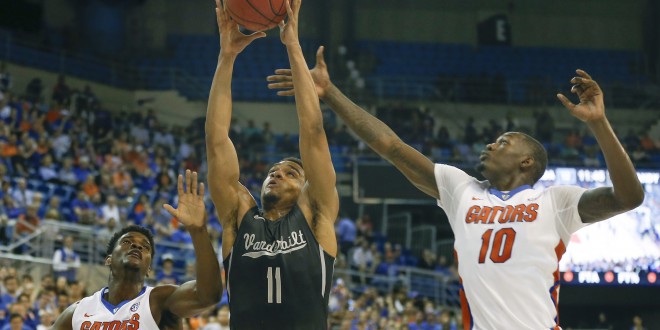 Florida and Vanderbilt met in a critical game in the SEC men’s basketball race as the two teams entered the match up tied for fifth place in the standings. The Commodores never trailed in the game and ended up beating Florida 87-74 Tuesday night, earning a resume-building road win and their first victory in the O’Connell Center since 2010.

Vanderbilt led by double digits in the first half but the Gators battled back near the end of the half to cut the Commodore lead to two points.  With just a few seconds left, Florida’s Schuyler Rimmer had an easy layup blocked, and Commodore Josh Henderson tossed in an 80-footer at the buzzer giving Vanderbilt a 40-35 lead at the half.

Despite Vanderbilt’s driving offense, the Gators still had plenty of opportunities. Florida looked like it would tie the game after trailing by only 69-67 with 6:36 remaining in the second half, but the Commodores continued to take control and dominate. Vanderbilt center Damian Jones was unstoppable, scoring a career-high 27 points with seven rebounds and guard Jeff Roberson added 18 points and 10 rebounds leading to the win. Florida had no answer for Jones.

Eventually, the Commodores took over and put the game away with a 14-2 run. Vanderbilt shot 57.7 percent–by far the highest percentage the Gators have given up this season. The Commodores finished 10 of 20 from three point range.

Justin Leon led Florida with 16 points, John Egbunu added 14, and Devin Robinson finished with 11. Dorian Finney-Smith and KeVaughn Allen combined for only 10 points as they combined to shoot just 1 of 14 from the floor. The Gators shot 40 percent overall and only 26 percent from three point range.