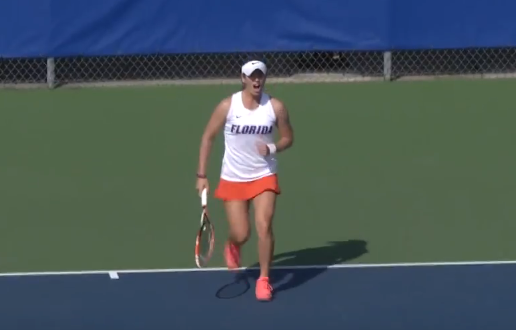 The Gators are set to face the top team in the nation in the No.1 California Bears on Friday at 3 P.M. and No.16 Stanford Cardinals Sunday at 3 P.M. The top ranked California Bears (8-0) are coming off an impressive 5-2 win over then No. 22 UCLA.  The Bears also secured their first ITA Women’s Team Indoor National Championship on February 8, 2016 defeating UNC 4-3. While Stanford (4-2) is coming off their third shutout of the season after sweeping Fresno State 7-0. Head coach Roland Thornqvist says the Gators have been playing great tennis thus far but this weekend will be Florida’s first true test.

The undefeated Florida squad is coming off notable wins against the likes of then No.4 USC,  No.29 Baylor and No.20 Clemson. The Gators extended their dual-home win streak to 151 matches in their 7-0 victory over Clemson on February 14, 2016. Florida’s last loss at home was May 15, 2004 in the second round of the NCAA tournament.

Upperclassmen Kourtney Keegan and Brianna Morgan will have to have a short memory in order to lead their team to victory over a Stanford team that blew them out two years ago 7-0. Thornqvist however was sure to point out that this year’s team is different. Not only are the Gators familiar with the 2016 Stanford team since they played them in an invite in Las Vegas in January, but they also have experience and new talent.

Following this weekend’s matches, the Gators will return to Gainesville to begin SEC play. Florida faces Arkansas March 3 at 5 p.m. and Missouri March 5 at 11 a.m. at Alfred A. Ring Tennis Complex.