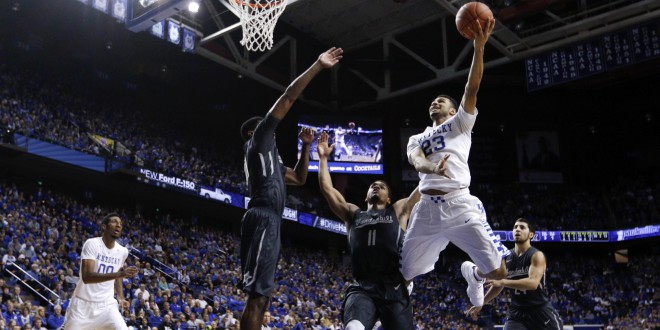 Kentucky will look to hold their number one spot in the SEC as they go up against Vanderbilt this weekend.

The Wildcats are coming off of a commanding win against Alabama at home on Tuesday night. That kind of win might be the motivation this team needs as they finish out their season.

Saturday, they will play in Nashville against the Commodores. The last time these two teams faced each other, Kentucky won decisively with a final score of 76-57. However, their record on the road (3-6) might prove that this weekend’s game may be a tougher matchup than last time. Not to mention starting forward, Derek Willis, will most likely miss the game due to a sprained ankle he suffered against Texas A&M last Saturday. After the Bama game, junior, Marcus Lee, talked about the benefit of having Willis on the court.

Kentucky (21-7, 11-4 SEC) is currently first in the SEC and have a one game lead on second place South Carolina.  At this point every game is important and they may need to finish the season out with nothing but wins to stay in first.

The Commodores are also coming off of a strong win at Florida Tuesday night. They will look to starters Damian Jones and Wade Baldwin IV as they face the number 16 Kentucky Wildcats. As the home team, Vanderbilt has gone 12-2 this season.

Vanderbilt (17-11, 9-6 SEC) is sitting in fourth place in the SEC. Although they started off conference play with three straight losses, they now have a chance to gain ground in this SEC matchup as they are only two games behind Kentucky.