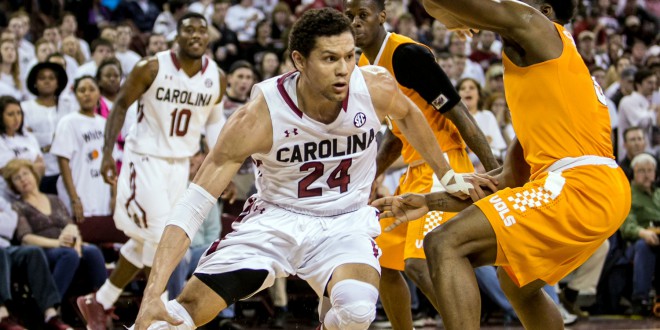 The South Carolina Gamecocks are just three games away from wrapping up one of their best seasons in over than a decade, but enough mines to derail a strong campaign still litter the road. One of those mines await them on Saturday.

The Gamecocks (23-5, 10-5 SEC) travel to Starkville to take on the Mississippi State Bulldogs (12-15, 5-10) for a Saturday matinee matchup at 2:30 p.m. At first glance, it seems like a mismatch. The Gamecocks’ record blows the Bulldogs’ out of the water. USC is the best rebounding team in the SEC (41 rebounds per game) and they edge out Mississippi State in points per game, blocks and assists per game. But numbers only tell half the story.

Though they’ve won two in a row, the Gamecocks have been mortal in their last seven games, going 4-3 with losses to Georgia, Kentucky and Missouri. They’re average on the road too, with a 4-4 record away from Columbia, SC. The Bulldogs, on the other hand, have won two of their last three and have an 8-5 record at home. Their lone loss in that span was a 68-66 nail biter at No.21 Texas A&M.

USC and Miss. State met earlier this season in Columbia where the Gamecocks won 84-74 on the heels of Michael Carrera’s 34-point performance. The senior forward is still on fire, posting a double-double (16 points, 10 rebounds) in Wednesday’s rout of Tennessee.

A win is crucial for South Carolina, as it keeps them afloat as the number two seed in the SEC, but keeps their hopes alive of catching Kentucky. The Wildcats are two losses ahead of the Gamecocks in the standings with three games left. Thanks to a tremendous season, USC is set to play in the NCAA tournament for the first time since 2004.  The Bulldogs, meanwhile, are near the bottom of the standings, tied for 11th with Tennessee and aren’t expected to be one of the 64 teams competing in the big dance.

But all talk of the NCAA tournament must be tabled until the SEC tournament is done. It kicks off on March 9 with a champion eventually crowned four days later. USC, who entered into the tournament as the 11th seed last season and bowed out to Georgia in the quarterfinals, are guaranteed to begin playing in the same round rather than fight their way to it.