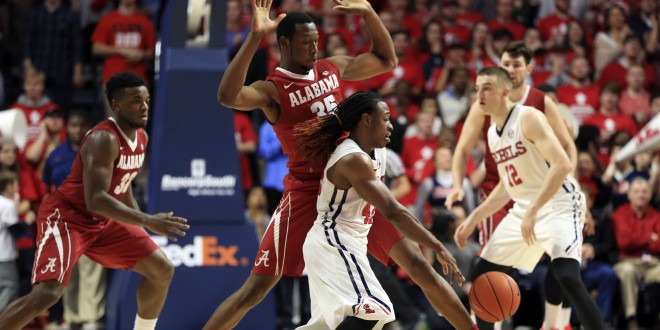 In the second round of SEC tournament play, Alabama (17-13, 8-10 SEC) and Ole Miss (20-11, 10-8 SEC) will face off at the Bridgestone Arena in Nashville, Tennessee. Tip -off is set for Thursday at 7 p.m. The Rebels enter the game as the 7th seed, winning four of their last five, while Alabama hangs on as the 10th seed, having lost four of their last five.

Ole Miss is looking for their third straight victory as they enter the tournament with back-to-back conference wins under their belt. They have also secured their eighth 20-win season in the last 10 years under head coach Andy Kennedy. Alabama is looking to win their first game since February 27, they come in the game suffering their last two losses to Georgia and Arkansas.

The Tide will be keeping an eye on Ole Miss Guard Stefan Moody who leads the SEC in scoring (23.1 points per game) and ranks 6th nationally (in scoring). Moody led his team to a victory over Mississippi State on Senior night last Wednesday with 43 points, which gave him the tie for most points scored in an SEC game this year. As for the Rebels, they’ll be paying attention to Bama’s point guard Retin Obasohan.

The Tide’s Senior Captain averages 17.7 points per game and averages 32 minutes on the court. He ranks third in the SEC, with 20.6 points per game in league play. Obasohan was also named SEC Scholar Athlete of the Year, First Team All-SEC, and All-Defensive Team on Tuesday.

The winner of this game with face Kentucky on Friday.