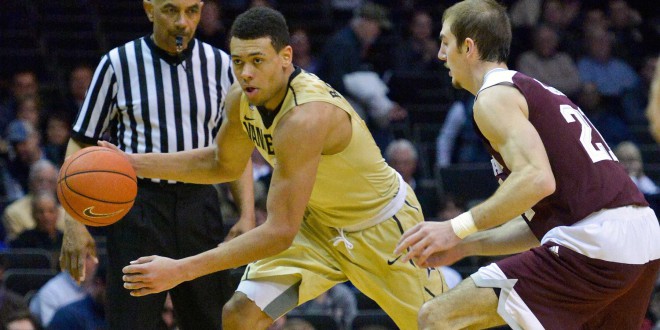 Today in Nashville, Vanderbilt will play in-state rival Tennessee in the second round of the SEC tournament.

Tennessee is coming off of their best shooting percentage this season at 59 percent in their win against Auburn in the first round. The leading scorers were Armani Moore and Detrick Mostella with 22 and 17 points, respectively.

The Commodores finished the regular season with a 19-12 record and went 11-7 in SEC play. They are the fifth seed in the tournament. Vanderbilt and Tennessee faced each other twice this season. The Commodores beat the Volunteers in both games by an average of 15 points. Wade Baldwin IV led the scoring for Vanderbilt in both games with a season-high 25 points in the first matchup.

Vanderbilt is led by Baldwin IV and junior, center Damian Jones, both averaging 14 points a game this season. Luke Kornet, a 7’1″ junior, will be key at the defensive end for the Commodores. He leads the SEC in blocks, averaging three a game.

The Commodores finished the regular season winning four of their last five games. Before the tournament, assistant coach Tom Richardson talked about the importance of finishing the season strong and how it can affect their performance in the tournament.