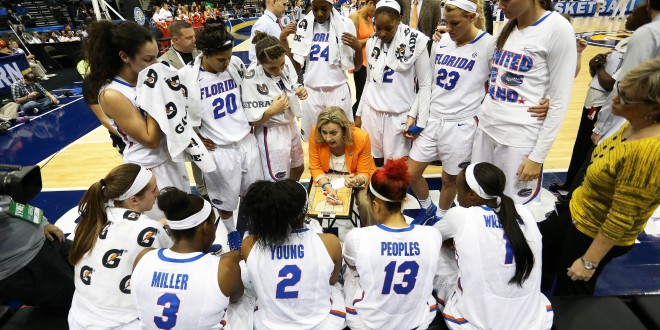 Going into the NCAA tournament seeded No.5, the Florida Gators did not leave the Carrier Dome the way they expected. The Gators who were 22-9 overall, 10- 6 in the SEC watched a win slip away in the last seven minutes of the game against No.12 Albany.

At halftime the Gators had a 15 point lead and came back in the second half looking pretty strong. This however did not keep No.12 ranked Albany from taking away the lead and stealing any hopes the Gators had in progressing in the tournament.

Unfortunately, for the Gators, the inconsistency and unpredictability in the second half of the game led to a disappointing end to one of the best seasons women’s basketball at the University of Florida has seen in over seven years.

After such a discouraging loss to Albany, Gators head coach Amanda Butler is thankful for many monumental moments that came with this season and is looking forward to what next year has in store.

In a press conference on Monday, Coach Butler spoke about the end of the 2015-2016 season and what is in store for the 2016-2017 season. One of the main points Coach Butler expressed during the press conference is that though the wins and losses are the main points people typically focus on, it is the accomplishments and the ability to overcome adversity that made this season successful.

The Gators will lose five seniors this year but have a very strong upcoming senior and junior class for next year. Butler says that the 2016 senior class will be greatly missed but is excited for the new opportunities and what next year has in store. With three highly sought-after freshmen, the team looks forward to what they will be to playing field.

The three incoming freshmen for the gators are all from around the area and Butler sys that she expects them to be an important and impactful part of the program next year.

The Gators are ready to get the freshmen on campus this summer to start preparing and practicing for next season.