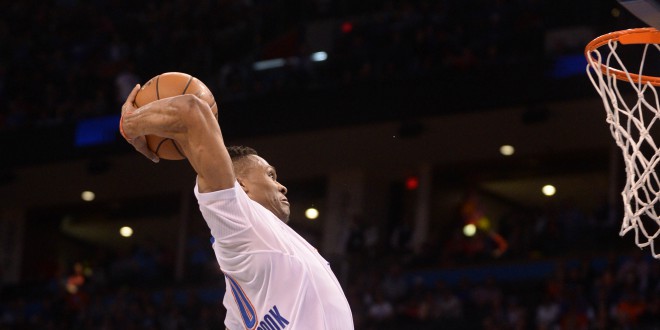 The Oklahoma City Thunder are on a role after defeating the Houston Rockets 111-107 on Tuesday night. This gives the Thunder their fifth consecutive win of the season.

This is former head coach of the Florida Gator’s, Billy Donovan’s, first year with the Thunder and it looks as though the team is responding well to his coaching style. Despite several obstacles, Donovan has lead the team in a successful season thus far.

Eyes seem to be on Russel Westbrook as he put up his 15th triple-double — 21 points, 13 rebounds and 15 assists in Tuesday’s game. He is now said to be in the company of “the great” Michael Jordan but he continues to stay extremely humble through all of the accomplishments.

This humble attitude seems to be consistent throughout the team as Kevin Durant gave credit to the entire team, including the supportive players on the bench.

The Thunder now sit with a 49-22 record going into Thursday’s night game against the Utah Jazz beginning at 8 p.m.