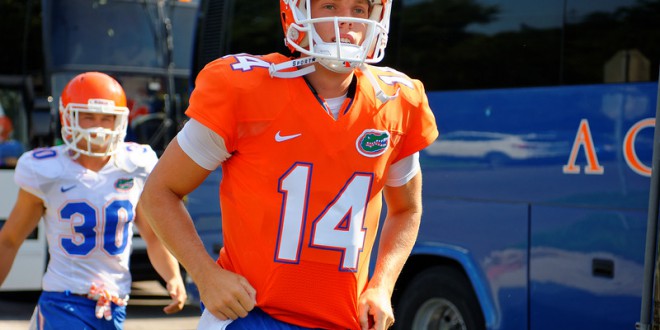 If anything else Wednesday was a star studded practice at the University of Florida. Former head ball coach Steve Spurrier was in attendance as well as Oakland Raiders head coach Jack Del Rio and even academy award winning actor Gene Hackman. St Thomas Aquinas standout quarterback Jake Allen, who will take his talents to UF upon graduation, was also in attendance with his father observing quarterback drills.

Quarterback Luke Del Rio addressed the media for the first time since the start of spring practice. The transfer quarterback from Oregon State has been standing out so far this spring among the other three quarterbacks; pro style freshman quarterback Felipe Franks, Purdue transfer Austin Appleby and Texas native Kyle Trask.

Redshirt Sophomore Del Rio is clearly the standout of quarterbacks so far in the Spring and is the probable starter for the upcoming spring game on April 8. Luke Del Rio has experience in multiple scenarios as quarterback. Before Oregon State, he spent his Freshman season at the University of Alabama in 2013 as a walk-on. The offensive coordinator at the time, Doug Nussmeier is now the offensive coordinator of the Florida Gators. Nussmeier has been coaching Luke Del Rio for a few years now, an advantage that Luke is running with.

Luke Del Rio compliments Nussmeier and says he is doing well incorporating the quarterbacks into the system.