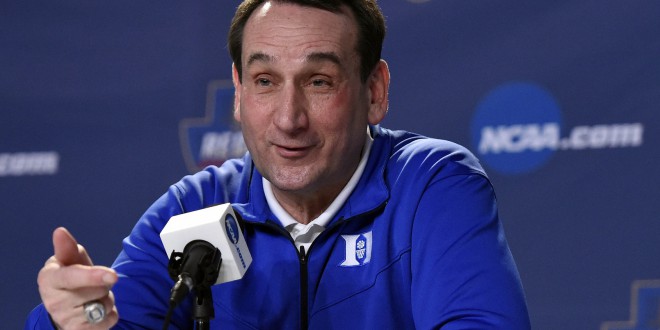 The defending champion Blue Devils face the Oregon Ducks in the Sweet 16 of the NCAA tournament on Thursday night.

The No.1 seed Ducks are playing the No. 4 seeded Blue Devils in the NHL’s Anaheim Duck’s arena. As the top team in the west region, the Ducks may have somewhat of a home court advantage in Anaheim.

Oregon had a remarkable regular season winning both the Pac-12 regular season and tournament championship. The Ducks have also had an impressive start in the NCAA tournament, taking down Holy Cross and St. Joseph’s in the first two rounds. The Ducks are difficult to defend with four players — Brooks, Cook, Dorsey and Boucher— averaging at least 12 points.

Duke lost four of its final seven games heading into the NCAAs, but have managed to reach the Sweet Sixteen for the 15th time since 1998. The Blue Devils are averaging 9.2 3 pointers per game, the most in the ACC.

Duke working on the fastbreak to get ready for a very athletic Oregon squad: pic.twitter.com/vyJnz8sod8

Although Duke is 0-4 all-time in NCAA Tournament games played in the Pacific time zone, Coach K told an ESPN reporter that it means nothing.

Tip off is set for 9:57 p.m. and the winner of this game will advance and take on the winner of No. 3 seed Texas A&M and No. 2 seed Oklahoma on Saturday.