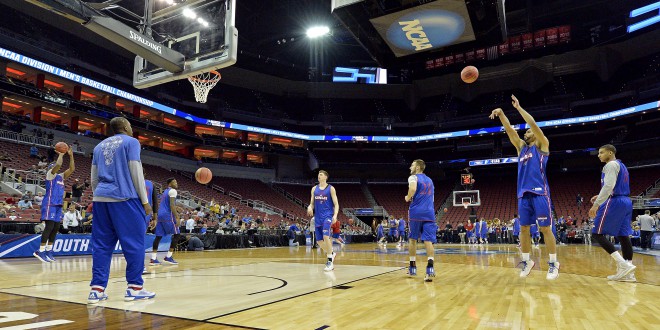 The No. 1 overall seed in the 2016 NCAA Tournament, Kansas, has sure played like one. With double-digit wins in both of their tournament games, the Jayhawks (30-4) will carry a 16 game winning streak into Thursday night’s South Region semifinal against fifth-seeded Maryland. This is Kansas’ first Sweet 16 in three years, but may be their best chance at a fourth NCAA Championship.

Maryland has played to the level of their opponents thus far in the tournament, outlasting South Dakota State 79-74 before rallying past Hawaii 73-60 in the second round to reach their first Sweet 16 since 2003. This season Kansas has averaged more points per game, rebounds per game, assists per game, and has a higher field goal and three-point percentage than the Terrapins.

There really is no true weakness when looking at the Big 12 regular season and tournament champions, Kansas owns one of the best backcourts in the nation with junior Wayne Selden (13.6 points per game), junior Frank Mason III (12.8) and sophomore Devonte’ Graham (11.4). Maryland counters with sophomore Melo Trimble (14.8) and the senior Duke transfer Rasheed Sulaimon (11.1).

The real x-factor in this one will be down low, as senior Perry Ellis (16.9 points, 5.9 rebounds) will go head to head with freshman phenom Diamond Stone, who is averaging 12.7 points and 5.4 rebounds in only 22.6 minutes a game.

Aside from the stats and players, other storylines loom as Maryland head coach Mark Turgeon played four years at KU and was a Kansas assistant under Larry Brown and Roy Williams. Current Jayhawks head coach Bill Self was a graduate assistant when Turgeon was a player.

Kansas leads the series 3-2 but may be looking for some revenge, as the last time these two teams faced off was in the 2002 Final Four, a game Maryland won en route to becoming national champions.

Tip-off will be at 9:40 p.m. from the KFC Yum! Center in Louisville, Kentucky. Kansas-Maryland will be the second game in the region, as Miami-Villanova tips off earlier at 7:10 p.m. The winners of each game will face off Saturday in Louisville in the Elite Eight.