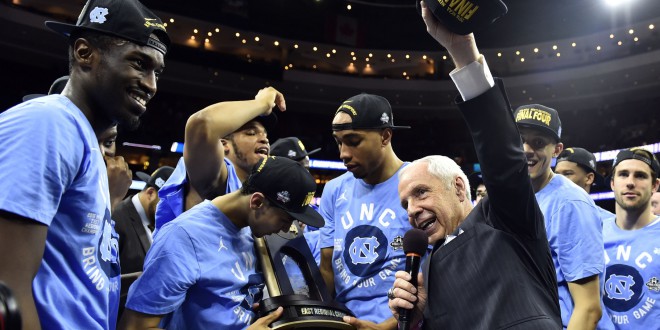 The Eastern Regional finals wrapped up Sunday night with No. 1 North Carolina defeating No. 6 Notre Dame with the Tar Heels defeating the Fighting Irish 88-74. Notre Dame made Carolina work for this historic win.

The Irish led the Tar Heels for the beginning of the first half, but it wasn’t until there was 6:07 left that Carolina took the lead for the first time. Justin Jackson made a three-point jump shot with an assist from Joel Berry II to make it 32-29. Notre Dame kept scoring, but North Carolina answered back. The Tar Heels led the Irish 43-38 at the half.

It was in the second half that the Tar Heels really came to life. North Carolina was leading Notre Dame 51-42 at the 15 minute mark, but the Fighting Irish went to work. Notre Dame scored 10 points within two minutes taking back the lead, making it 52-51. At the nine minute mark, North Carolina had scored 12 points straight to make it 63-52. Notre Dame never recovered from UNC’s surge.

In a close game, momentum can be a team’s best friend. Carolina guard Joel Berry II recognizes how big of a factor this can be. Berry scored 11 points hand had eight assists in Sunday night’s game. He also felt that reserve Theo Pinson was the one who really got North Carolina rolling. Pinson stole the ball from forward Bonzie Colson and UNC immediately called a timeout right before their 12-0 run in the second.

The NCAA Tournament has been filled with twists and turns so far. Heading into the Final Four, North Carolina guard Marcus Paige feels like North Carolina is ready of any matchup that comes their way.

The win against Notre Dame is special to North Carolina for many reasons. To start off with, this is UNC’s 19th Final Four appearance, an NCAA record. They are also the only school to have at least one Final Four in eight straight decades. North Carolina hasn’t been to the Final Four since 2009. The Tar Heels are the only No. 1 seed team left in the NCAA Tournament.

With that being said, North Carolina will take on No. 10 Syracuse Saturday, April 2 in Houston.

Senior telecommunication and history major at the University of Florida and contributor for ESPN Gainesville 95.3. Baseball and hockey are my favorites, but I love all sports.
@MichelleSpring6
Previous Sooners Advance to Final Four
Next Florida State Spring Football Scrimmage Recap

After starting as a student manager, Matt McCall worked his way up to becoming the …