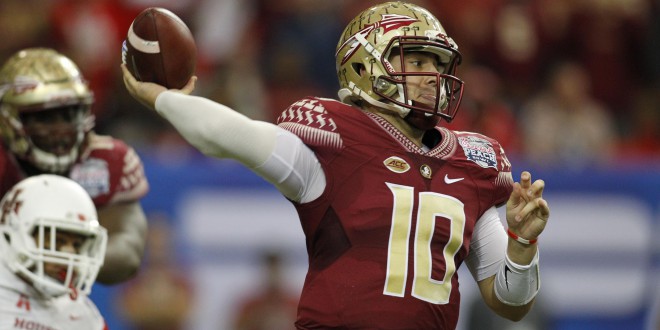 The Florida State Seminoles, arguably the best college football team in the state of Florida, held their first scrimmage of the spring season this past Saturday. The scrimmage was scheduled to be held in Doak Campbell Stadium, but weather forced the team inside their training facility for the entire practice.

This was the first opportunity for many young guys to prove themselves and to compete for a starting position. The main battle surrounding the team though is at the quarterback position. With redshirt senior Sean Maguire out for the spring due to ankle surgery, first team snaps went to redshirt freshman Deondre Francois. Francois took first team snaps ahead of true freshman Malik Henry and redshirt sophomore J.J. Cosentino. Head coach Jimbo Fisher says that spring scrimmages are a great way to see what these younger guys are made of.

The Seminoles will look for a season long starter at the QB position after injuries and inconsistent play plagued the position last season. Notre Dame transfer Everett Golson was the starter when the season started but went out with a concussion in the loss against Georgia Tech. Sean Maguire finished the season under center where he got a win over No. 25 Florida but fell to Houston in their bowl game 38-24. Maguire is the presumable starter for the upcoming 2016 season.

Many experienced starters such as running back Dalvin Cook, and defensive leaders Derwin James and DeMarcus Walker sat out almost all of the scrimmage to give younger guys reps and to prevent injury. Cook is coming off a phenomenal season where he rushed for almost 1,700 yards, 19 touchdowns, and averaged an unbelievable 7.4 yards per carry. Sophomore Jacques Patrick took a bulk of the carries on Saturday with redshirt junior Ryan Green getting some reps as well.

Senior cornerback Marquez White is still out after breaking his hand. The senior started all thirteen games last season and should return to the field soon. The Seminoles need someone to step up in their secondary after losing star safety Jalen Ramsey to the NFL draft.

Another standout from the scrimmage and practice has been kicker Aguayo, but not Roberto instead younger brother Ricky. The true freshman is the front runner to replace his brother who left for the NFL draft. The freshman was an Under Armour All-American and rated as the No. 4 kicker in the nation.

Fisher says that overall the first scrimmage went well but there is more to improve on before next season.

Im a senior at the University of Florida currently pursuing a degree in Telecommunications. I work for ESPN Gainesville 95.3 and anchor the Monday sports broadcast for WUFT First At Five. Im from New York and an avid sports fan of all New York teams.
Previous North Carolina Earns 19th Final Four Appearance
Next Warriors on Pace to Dethrone Jordan, ’96 Bulls