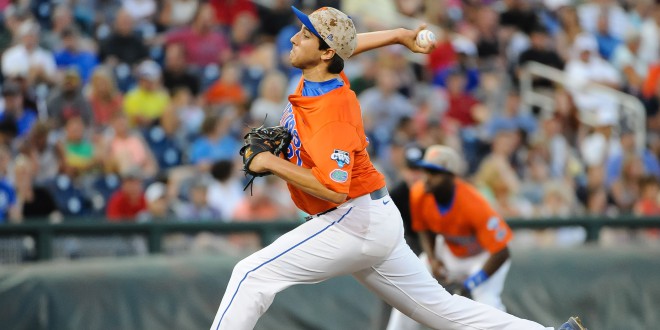 The Florida Gators continue to make the case that they deserve to be the number one ranked team in the country with a 7-2 victory over Texas A&M at McKethan Stadium on Saturday night. The Gators have now taken the first two games of the series through a dynamic offensive approach and stifling pitching.

Alex Faedo took the mound looking to continue what’s been a breakout season for the sophomore. Faedo had a rough first inning, but was able to minimize the damage to just two runs. A&M’s JB Moss started the game by blasting a 2-2 fastball over the left center field wall for a lead off homer. The play was confirmed after a replay review. The Aggies took a 2-0 lead after tacking on another run after a Gator error. Coach Kevin O’Sullivan believes that Faedo’s ability to keep the deficit minimal through his toughness was huge for the team.

In the home half of the first, the Gators responded in a big way in support of their starting pitcher. Mike Rivera drove in two with a double in the left centerfield gap that plated Peter Alonso and Deacon Liput, with Liput just sliding under the tag at home plate by a fraction of a second. After a 49 minute first inning, the Gators were up 3-2 and never looked back from there.

Faedo settled into a grove for the rest of the night. The 6’5″ righty went on to throw five straight scoreless innings en route to a six inning, one earned run outing including seven strikeouts. After the game, Faedo said he was proud of his team for giving him the confidence to perform on the mound.

While Faedo was shutting down the Aggie offense, the Gators offense worked to put the game out of reach. In the bottom of the second, Peter Alonso added an RBI single to put the Gators up 4-2. Alonso followed that up with a towering home run into the left center field bleachers in the fourth, giving the Gators a 5-2 lead.

Overall, the Gators scored seven runs on 12 hits and made one error. Texas A&M finished the night with two runs on eight hits and one error.

The teams will finish the series Sunday at 2 p.m. at McKethan Stadium.

Previous Gator Softball Bounces Back, Defeats Crimson Tide 3-2 to Tie Series
Next Gator Baseball goes for the Sweep against No.1 Texas A&M