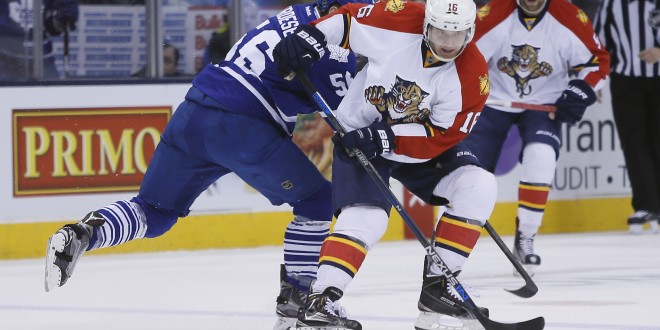 No goals were scored by either team in the first period, but during the second period the Panthers stepped up their game.

Florida had a total of three goals in the second period alone, thanks to three  Maple Leaf penalties. Toronto went into halftime with no points on the board.

After halftime, it was Toronto’s turn to step up. The Maple Leaf’s came back in the third period, scoring three goals to almost tie the game. However, ten minutes into the third period, Panthers center Aleksander Barkov scored to make his 27th goal and to put the Panthers up 4-2.

With eight minutes left in the game, Colin Greening scored for the Maple Leafs, but Florida kept their defense up throughout the rest of the game to ensure their victory.

Panthers center Rocco Grimaldi scored two goals for his team in last night’s match up. Grimaldi says now that his team has clinched a playoff spot, next up is clinching the division.

Last night’s game was the Panthers’ 700th win in franchise history. The Panthers now stand at a record of 45-25-9. Wednesday the Panthers travel to Ontario, Canada to face the Ottawa Senators. The Panthers and Senators did met earlier in the regular season, with the Panthers winning in three out of their four match-ups. Wednesday’s game is set for 7:30 p.m.