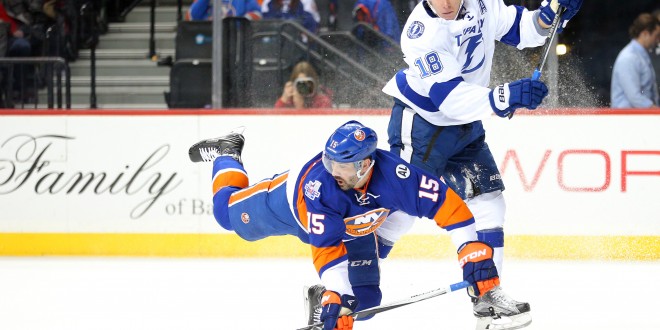 The Tampa Bay Lightning came into the Barclays Center looking for their 46th win of the season. A victory on the road against the New York Islanders would give them the third most wins in the Eastern Conference, leaving them feeling good entering a three-game road trip in the northeast to close out the season.

Lets just say those weren’t the feelings that Tampa Bay felt when they left that night.

With playoff hopes on the line, the Islanders (43-26-9) defeated the Lightning (45-29-5) in a game that saw Ben Bishop give up costly goals and the abscence of team Captain Steve Stamkos seemed ever more present.

This absence of Stamkos could be a huge blow to the Lightning, who will look to continue their playoff dreams without a pivotal cog in their machine who gave them 36 goals in 77 games. Stamkos could be sidelined anywhere from one to three months, according to GM Steve Yzerman and that timetable will not be known until a later date.  And with unrestricted free agency looming, Tampa Bay may have a larger problem then just the injury that he is currently facing. However, head coach Jon Cooper says that the injuries that the team faces shouldn’t be an excuse for poor play.

Johnny Boychuck of the Islanders got the scoring started, as he chipped one in off of an assist from John Tavares about four and a half minutes into the first period. The game started aggressive, with two early fights setting the tone for the rest of the matchup. The first was between Kyle Okposo and Nikita Nesterov, a short altercation that ended with just roughing minors, but the second was a larger fight between Ryan Pulock and Cadric Paquette, which drew five minute fighting majors for both players.

With no more scoring going on in the first period, Tampa Bay faced a 1-0 deficit to start the second. Things would turn around quickly, as Alex Killorn would score on an open opportunity just two minutes into the period. With things knotted at one a piece, this was anyone’s game.

Nine minutes later, a face-off won by Casey Cizikas and some poor defensive play from Lightning goalie Ben Bishop allowed Matt Martin a goal off of an assist from Cizikas and Cal Clutterback. With a 2-1 lead, the Islanders were far from satisfied. Only four and a half minutes later, an easy break allowed Brock Nelson to score another, and less than a minute later, a penalty eventually gave John Tavares the room to line up a nice shot to give them a commanding 4-1 edge.

The Lightning showed fight with Victor Hedman scoring with just seven seconds remaining in the period to cut the lead, but that was the last scoring effort of the night for the Lightning.

Extremely strong defensive play from the Islanders turned a possible Lightning score into a goal on the other end, practically ending the game 5-2. The rest of the game would include aggressive play by Tampa Bay to no avail.

With just three games left in the season, the Lightning will look to continue their playoff push without their best player and with the remainder of their schedule on the road. Their next game comes against currently fourth seeded New York Rangers, before taking on the New Jersey Devils and concluding their trip with a visit to South Florida to take on the Panthers.

The Islanders, on the other hand, split their final four games of the season, with two on the road and two at home. None of them will be easy, with three out of the four boasting an above .500 record, but NY must prevail in order to keep themselves in the picture.

Both teams can use this game as a guideline for the home stretch, and that home stretch will need to feature some wins for both squadrons. The Lightning take on the NY Rangers Tuesday night at 7:30 p.m.